Mother horrified by photo of St. Louis cop giving 'thumbs up' next to her son's body 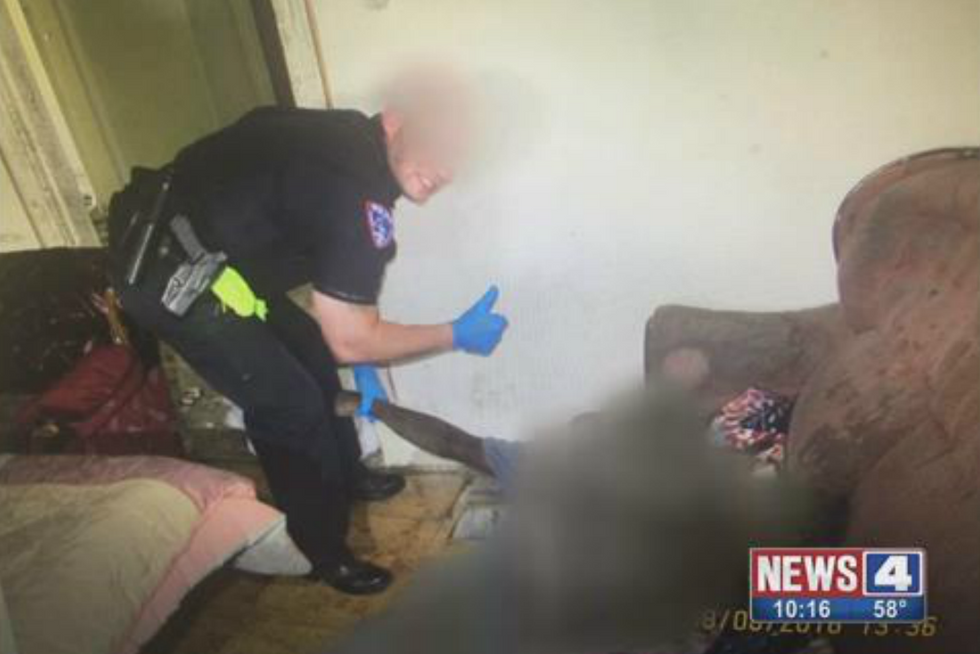 The mother of a St. Louis, Missouri man was horrified to see a leaked photo of a police officer giving the "thumbs up" sign next to her son's dead body.

KMOV Channel 4 reported that now Kim Staton -- mother of Omar Rahman, who was 28 when he died on August 8 -- wants answers.

Weeks after his death, a photo surfaced of Rahman's body at the location where he was found dead. In it, an officer from the North County Police Cooperative is wearing latex gloves while holding Rahman's limp arm with one hand and giving a "thumbs up" to the camera with the other.

The photo does not break any specific laws, but it raises serious questions about officers' conduct and the handling of evidence.

“In your mind, is there any reasonable explanation for what that officer was doing?” Trager asked the grieving mother.

"No," she replied. “Because when they come to a call, they're supposed to be there to help and protect, not doing what he was doing with thumbs up and a smirk on his face.”

Her attorney, Antonio Romanucci, said, "It's hideous. The implications of this photograph are just astronomical."

“I have seen thousands and thousands of forensic photographs, I have never seen a staged photograph of an officer next to a deceased body,” he said. "Who was there that allowed this to go on? Was there any Sergeant involved? Those are the questions that need to be asked and that's what needs to be found here."

It's still unclear how the photo was leaked to the public. Police only responded to Staton's queries when the TV station became involved. They said that they can't find their official crime scene camera and that hard copies of the photos are missing as well.

Trager pressed North County Co-op. Chief Tim Swope for an explanation, but he refused to answer any questions on camera.

When she spoke to former St. Louis Chief Dan Isom, he said, "I don't know why he's raising his thumb in the air, I don't know what he's doing at that point, I can't explain why you would be doing that in the photo, but certainly there are reasons why a person might turn a body over, view it, for signs of trauma."

He went on, "The fact that the photo is out is just problematic, so even if you can't determine the intentions of the officer, which by the photo, look questionable, you certainly are distressed and concerned that it's out in the public.”

Romanucci has filed suit against the Co-Op to get more information.

Lawyers representing the Co-Op threatened Trager with legal action if KMOV published the photo, alleging that it is stolen property.

"NCPC does not believe it is appropriate to comment on a matter related to 2 open criminal investigations," they wrote.

Trager responded, "Your letter is disturbing on both the law and the facts, and I urge you to do some further research before you continue threatening KMOV-TV."

Newsrooms are protected in situations such as these, she explained, under the Privacy Protection Act of 1980 -- in which Congress prohibited the serving of warrants on newsrooms that are investigating corruption.