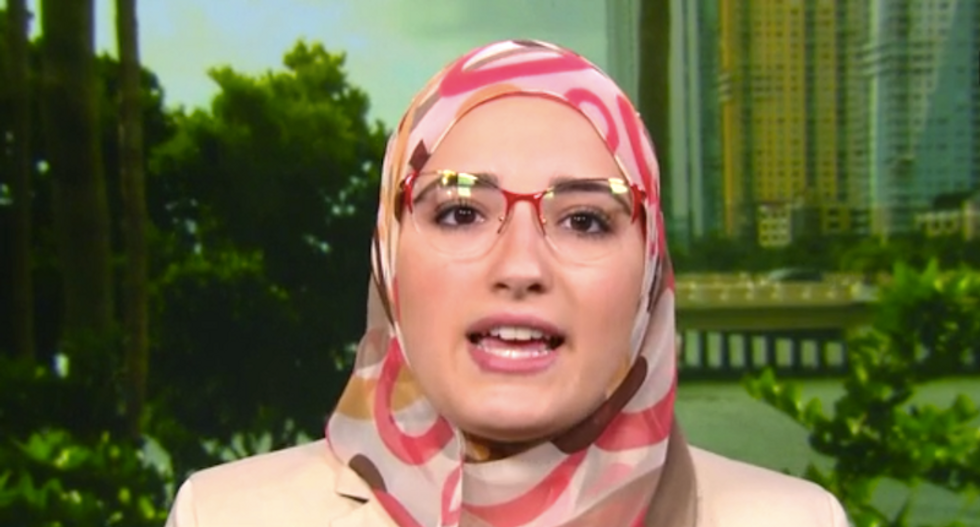 A Muslim writer said she was threatened by a man in the waiting room of a hospital -- but she said the inaction of bystanders actually scared her more.

Alaa Basatneh, a Miami-based writer who covers justice issues for Fusion, has worn a headscarf for 12 years -- but she switched to a hat while in public after Donald Trump was elected president.

"It's no longer safe to walk on the streets with a headscarf," Basatneh said.

She fears Trump's win has legitimized his hateful campaign rhetoric against Muslims -- who he has proposed banning from the U.S. and setting up a registry for Muslim immigrants.

Basatneh tried to get over her fear and wore a blue flower-patterned headscarf to a doctor's appointment Friday, but said another patient threatened her.

She said an older white man stared at her from one seat away in the waiting room, and then took out a pocket knife, opened it and placed it on the open seat between them.

"I felt threatened," she said. "I was shocked. And I was waiting to be stabbed just for the fact that I was wearing my headscarf."

Basatneh said she remained in her seat, trying not to betray her fear, but none of the other patients intervened.

"There were about 20 people in that room, and everyone just carried on their normal conversations as if nothing happened," she said. "That is scary -- that is scarier than the fact that he took out that weapon. The people around us are not saying much."

The man eventually picked up his knife, put it back in his pocket and muttered "deport them all" as he moved to another seat.

Basetneh reported the incident to the hospital staff, but they were unable to do anything after the man had put the knife back in his pocket.

"It's no longer safe to walk on the streets with a headscarf now," @AlaaBasatneh tells @CarolCNN. https://t.co/TvB3NTu7hx