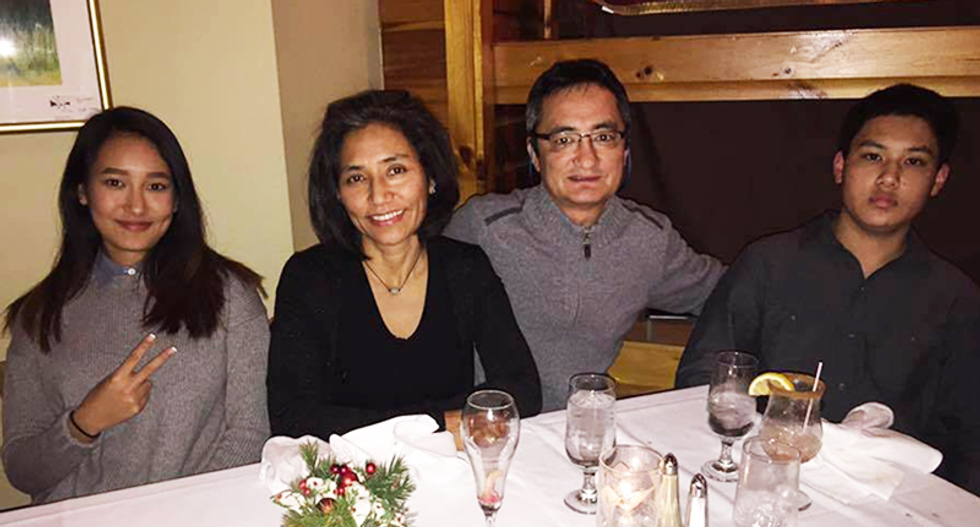 New York immigrant Tenzin Dorjee came to the United States to escape the Chinese government. But since the election, he has experienced repeated harassment and he's trying to figure out how to fight back.

Dorjee is quick to say that in the past he's experienced "minor stuff," where people would trash his flowerpots. The latest round of harassment, he told North Country Public Radio, "feels very different."

The day after Donald Trump was elected, Dorjee was walking from his car into Walmart, when he ran into two men in camouflage jackets.

“It was a couple of guys standing next to a couple of trucks," he said. "And that’s when they say, ‘Hey ch*nk, get the f*ck out of my country. Go back to where you came from.’ And I just smiled at them.”

One unfortunate experience would be sad, but according to Dorjee, “Then it happened again.”

Just a few steps from those men, another group of people used the same racial slur.

“I felt very uncomfortable, unsafe,” Dorjee said. “I just turned around and went back home.”

Days later, he was running errands and two older men pulled out in front of him on purpose, cutting him off. The men flipped him off, but that wasn't what bothered Dorjee the most. They were elderly. “That was something that I wasn’t expecting," he said.

On Monday, his car was vandalized. It was parked just outside of his home. He's not sure if it was racially motivated, but he noted that it hasn't happened in the nine years he's lived in the city.

When he came to the United States, he was hoping to escape all of this. Things were so bad when he was over seas, Chinese officials caught up to Dorjee and his family and beat him so badly he couldn't recover for three weeks.

His life hasn't been like this since he moved to Plattsburgh, New York, just north of New York City. The people of North Country have embraced him. He's volunteered hundreds of hours to build the community's cultural diversity. His family is well liked and respected. Each year, they organize the annual Tibetan arts and cultural festival. Last year, Dorjee was overwhelmed as artists unveiled a permanent mandala tile mural on the side of a downtown building.

“I’ve always been asked this question of 'how many Tibetan families are there in Plattsburgh?' And I’ve always said plenty. And this goes to prove that whatever I said about my family in Plattsburgh is correct...The hearts that I have here are Tibetan,” he said in a PBS documentary about the festival.

But now he's consumed with fear.

After his daughter and her friends were tailgated "by a crazy person driving a truck," he took to Facebook to discuss his heartbreak.

"Hey, I just want you to know what happened last night," he relayed that his daughter said. "I and my friends were literally chased around by a weird dude driving a truck. He tail gates me for several minutes around the college parking lot. My friends screamed at me not to stop or get out so I kept driving around. I called campus security screaming for help. He drove off when he saw police cars approaching."

He said that what surprised him the most about the conversation was that his daughter was bothered by his assumption that the attackers were coming after her because of racial bias.

"She did not believe that she was targeted because of the color of her skin or ethnic background," he wrote. "She said it was dark and there was no way the person could identify race. I said that she may have been marked as a target any time before that. There was no way that she would even consider that and rather she told me that I should not be biased in my thinking."

It warmed his heart that his daughter saw goodness in all people, even those harassing her. According to Dorjee, she "looks beyond the hate that is going around now. She sees the goodness loud and clear and I am proud that I [sic] learned a lesson from her and will follow her lead in seeing the goodness. I have to learn not to be biased as she has taught me," he wrote. "Being biased is not acceptable too just as much as hate. I'm sorry if I've been biased in my thought and posts."

To protect himself and his home he's opting to buy security cameras and not guns. He's also working to organize a forum on racism and xenophobia. The leaders in the city fully support his efforts.

“Bring it on. Your hate is not going to change me into you," he wrote in a Facebook post about the car vandalism.

Dorjee became a naturalized U.S. citizen six years ago. He co-owns the Himalaya Restaurant in Plattsburgh, which opened a second location recently.

Listen to part of his interview via North Country Public Radio below: