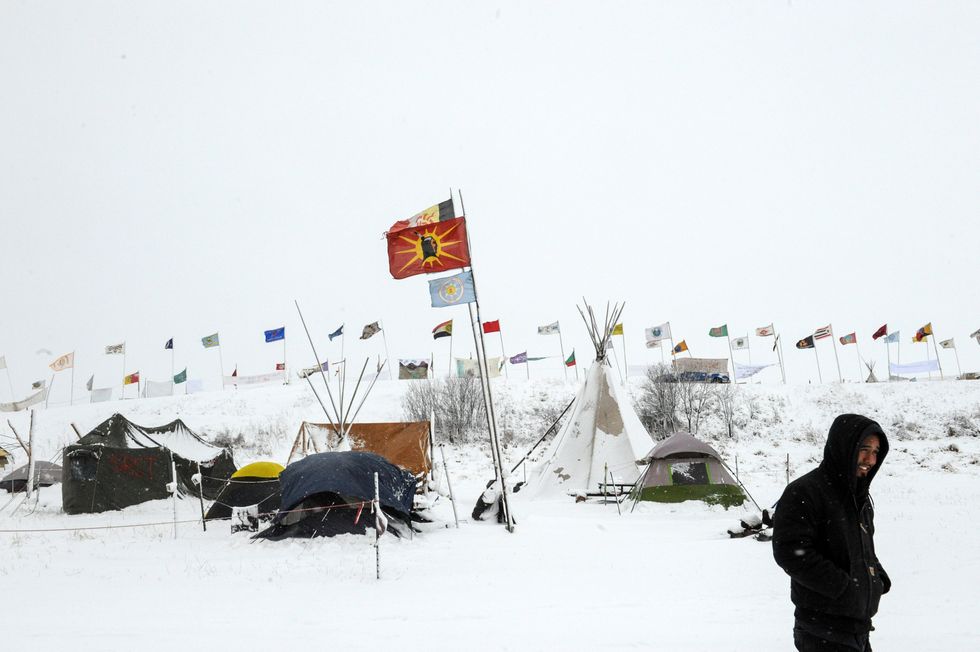 The Oceti Sakowin camp is seen in a snow storm during a protest against plans to pass the Dakota Access pipeline near the Standing Rock Indian Reservation, near Cannon Ball, North Dakota, U.S. November 28, 2016. REUTERS/Stephanie Keith

North Dakota Governor Jack Dalrymple ordered an emergency evacuation on Monday for protesters at the main camp near the Dakota Access Pipeline due to "harsh winter conditions," his office said in statement.

Demonstrators at a camp on land owned by the U.S. Army Corps of Engineers in southern Morton County, who oppose the $3.8 billion pipeline, were ordered to leave the area immediately and not return, according to an executive order signed by Dalrymple.

"Winter conditions have the potential to endanger human life, especially when they are exposed to these conditions without proper shelter, dwellings, or sanitation for prolonged periods of time," the executive order said.

It added that the area in which the camp is situated is "not zoned for dwellings suitable for living in winter conditions."

Most of western and central North Dakota are under a winter storm warning, according to the National Weather Service, which said the area would experience heavy snow through Wednesday.

Demonstrators have protested for months against plans to run the Dakota Access Pipeline, owned by Energy Transfer Partners LP, beneath Lake Oahe near the Standing Rock Sioux reservation, saying it poses a threat to water resources and to sacred Native American sites.

The 1,172-mile (1,885-km) project is mostly complete except for the segment planned to run under Lake Oahe, less than half a mile (0.8 km) north of Standing Rock.

The Obama administration in September postponed final approval of a permit required to allow tunneling beneath the lake, a move intended to give federal officials more time to consult with tribal leaders. The delay also led to escalating tensions over the project.

Police last week used water hoses in subfreezing weather in an attempt to disperse about 400 activists near the proposed tunnel excavation site.

(Reporting by Timothy Mclaughlin in Chicago; Editing by Chris Reese and Leslie Adler)