‘Not okay’: Teary-eyed Brooke Baldwin breaks down after CNN guest uses the N-word on air 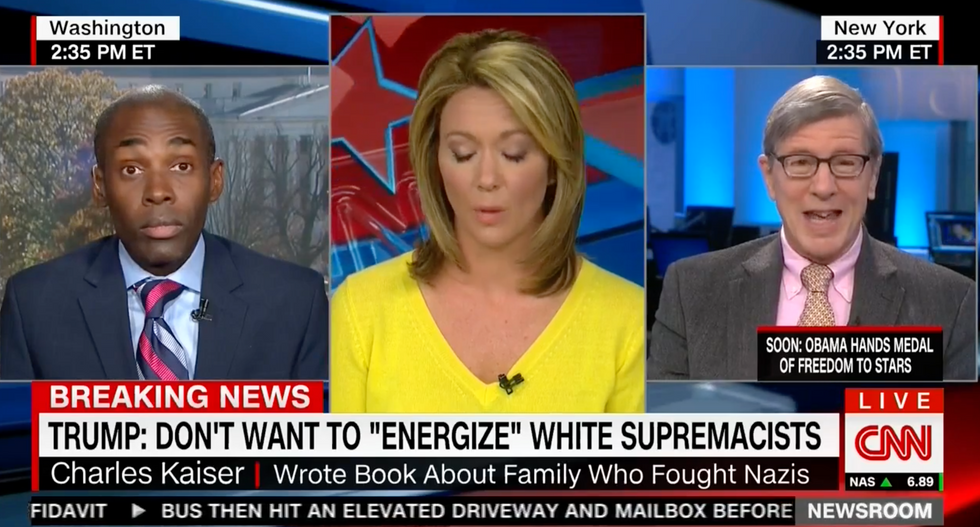 Discussing the recent Atlantic video featuring a group of white supremacists, led by Richard Spencer, expressing “exuberance” for Donald Trump’s election by giving the Nazi salute, GOP consultant Paris Dennard and journalist Charles Kaiser launched in to a heated discussion about whether the president-elect should do more than simply disavow his alt-right supporters.

Kaiser rattled off a list of ways the president-elect had already emboldened neo-Nazis.  Kaiser said Trump retweeted a Twitter user named “white genocide” who listed his address as “Jew America,” asked his supporters to give the Nazi salute (by asking them to pledge their support to his candidacy), selected “the most homophobic man in American public life” as his running mate and choose as White House counsel “a man who uses the word n*gger.”

“Charles, I appreciate you going through all of this, but please don’t use the n-word on my show,” Baldwin interjected.

“I’m sorry,” Kaiser said, “But I never use the n-word, except when I’m quoting someone who’s been appointed by the President to the Oval Office, since this such a disgusting moment in our history.”

Dennard called Kaiser’s use of the n-word “highly offensive,” before arguing it “is enough” for Trump to disavow the comments.

“How do you feel when he retweets white supremacists?” Kaiser asked, as Dennard protested his counterpart’s interjection, later insisting Kaiser’s “interruptions are inappropriate.”

“First of all, I don’t think you’re the host of the show, so I’m not going to answer questions from you,” Dennard replied.

“I appreciate your voices,” Baldwin continued. “I am still—the more I’ve sat here and listened to the fact that somebody used the n-word on this show. It is not okay. It’s not okay. Charles Kaiser, I respect you, I appreciate having you on as a guest, but... not okay.”

“Take a break,” she concluded.