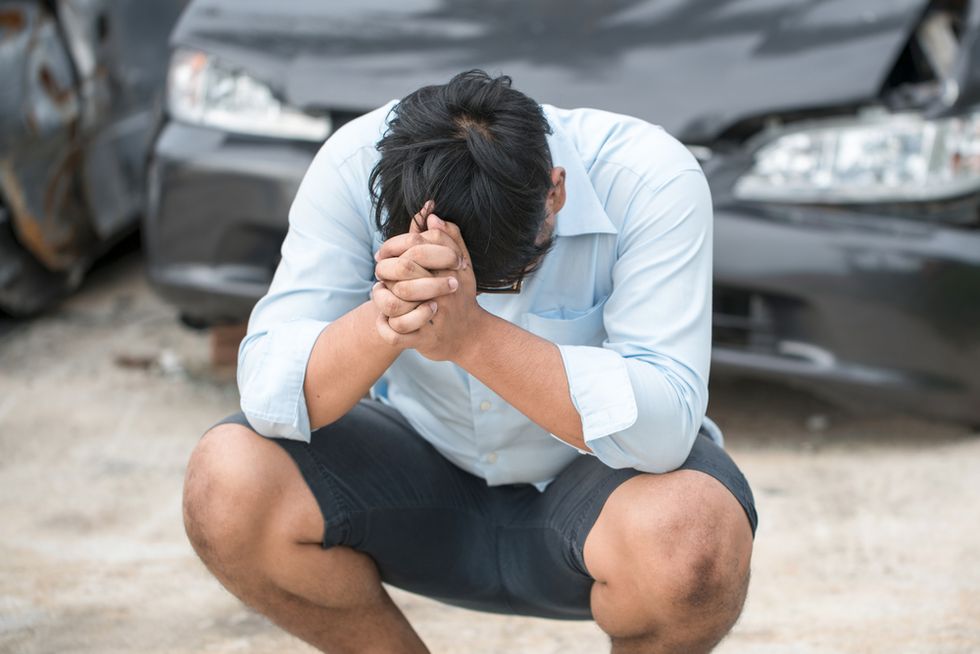 A man is upset after a car accident (Shutterstock.com)

A 13-year-old boy in Butler, Pennsylvania leapt from the back seat of an out-of-control car after his father lost consciousness in an apparent heroin overdose on Thursday.

According to the Butler Eagle, the teen jumped out of the driver's side rear door of his father's 2010 Ford Focus after his father abruptly passed out at the wheel.

The boy landed in the parking lot of the Pullman Square shopping center unhurt, but the car continued onward through a bank of shrubbery and hit the curb by an Arby's restaurant before coming to a halt.

Capt. Tom Fair of the Butler Fire Department told the Eagle that the 34-year-old driver's heart had stopped.

"He was dead at that point," Fair said.

Rescuers arriving on the scene, however, were able to use the anti-opioid drug naloxone -- sold under the brand name Narcan -- to restart the man's heart and save his life. CBS Pittsburgh reported that he refused further medical treatment.

Officials say that they retrieved a syringe and an unnamed contraband substance from the crashed vehicle.

Fair said that rescuers were particularly concerned about the boy.

“He wasn’t hurt but he was shook up,” said. “He was probably more scared for his dad. It was sad to see a 13-year-old go through that. I feel bad for him. He was cordial and very polite.”

The boy's mother and father are residents of Beaver County, but are reportedly separated.