Racist attack by Trump supporter caught on camera: 'You're a little b*tch, eh?' 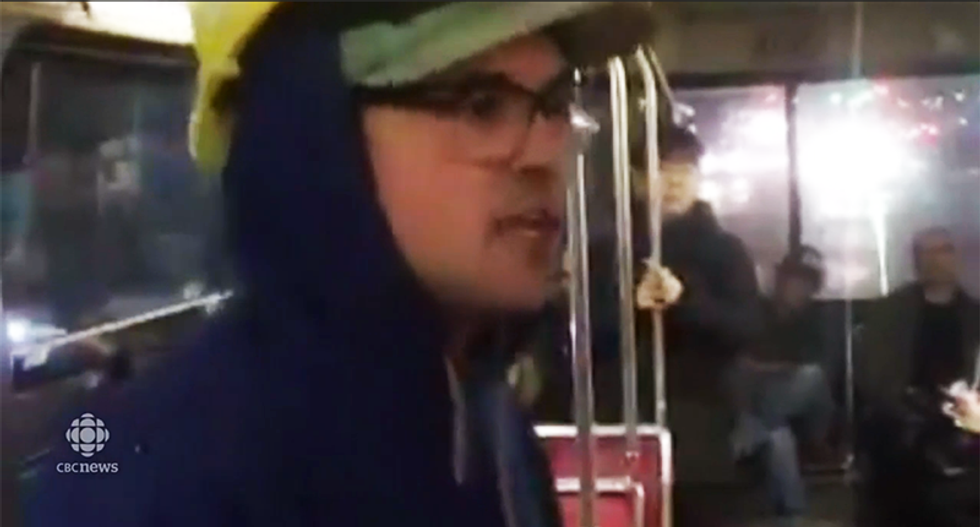 Freelance writer Valeska Griffiths was on the St. Clair Avenue streetcar in Toronto when she encountered a racist that left the whole car horrified.

On the video she captured, a man in a blue hoodie and hard hat is being held back from a dark-skinned victim. The man claims he was punched in the face, though no one witnessed the incident, CBC reported.

"You're a little b*tch, eh? Welcome to Canada," he yells back.

Griffiths eventually lost her cool and called the man a "f*cking racist." She said that the man responded by saying he was proud of his racism. He then shouted, "Go Trump!"

The video shows the man saying, "these people think they have the right to assault us." He then called the victim stupid and alleges, "he's not from around this town, I can tell by his face."

The streetcar driver ultimately stopped and waited for police to intervene.

Police spoke with both of the men involved and allowed the man being yelled at to return to his seat on the streetcar.

The officer explained that there was shoving between the two but the accuser admitted there were no punches thrown. Neither man opted to press charges.

Griffiths noted that the victim was shaken by the incident. "He kept apologizing for wasting my time, which broke my heart," she said. "He showed a lot more grace than I would have."

The video shows commuters reassuring the victim that he did nothing wrong. One person explains that "everyone here" isn't like that.

Transit spokesman Brad Ross said that the transit system must be a safe place for all riders.

"We will continue to work with police to ensure incidents like the one in the video are the exception and not the rule," he said in a statement.