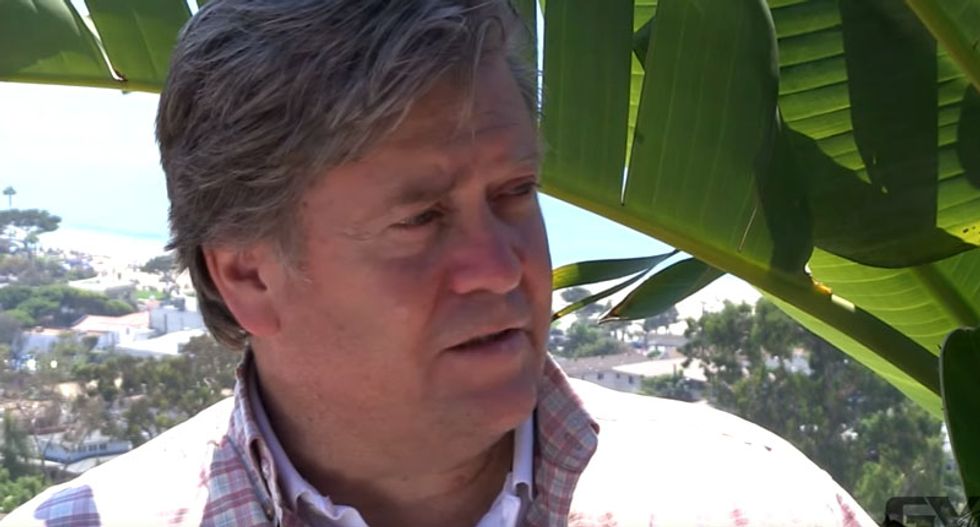 Donald Trump’s elevation of Breitbart News CEO Stephen Bannon to chief White House strategist is prompting many to ominously predict the Trump presidency will be like the worst of the campaign. But there’s an even more disturbing power play in the works.

Before Bannon turned “Breitbart News into Trump Pravda,” as one ex-Breitbart writer put it, Bannon backed 2016’s darkest ideologue, Republican Ted Cruz. Bannon went all-in for Cruz, not just because of his libertarian economics, but because his patron and ally, the family of hedge fund billionaire Robert Mercer, enlisted him and other Mercer-funded political assets for Cruz.

“Breitbart News was cranking out a stream of favorable Cruz stories,” Politico recounted in September. “And both the Mercer-backed pro-Cruz super PAC, ‘Keep the Promise I,’ and the Cruz campaign signed up Cambridge Analytica [Mercer's data research firm]. And only hours after the Texas senator officially launched his campaign at the Christian university Liberty University, he and his wife appeared at [daughter] Bekah Mercer’s extravagant Upper West Side apartment for a fundraiser.”

The Mercers, led by Rebekah, didn’t quit after Cruz's bid failed. They met with Trump’s children and the nominee, and in August their team, including Bannon and pollster Kellyanne Conway, were running Trump’s presidential campaign. As Politico noted, people who know the Mercers and their team said they were working for a far-right agenda, not any particular Republican candidate.

“I don’t think it’s about Trump. Trump is just a vehicle,” a Mercer family colleague told Politico. “It’s about wanting to be a player and wanting to beat Hillary, in that order. Because if you remember, they wanted to use Cruz as a vehicle before that. They do want to beat Hillary, but they also want to beat the Kochs and Paul Singer and the Ricketts [other far-right billionaires].”

This week, when Bloomberg described how campaign CEO Bannon directed Cambridge Analytics to test-market Brexit-like messages to white voters in Rust Belt states, Bannon had chilling words for anyone who believes in progressive federal government.

“This is not the French Revolution,” Bannon said, characterizing Trump's achievement and goals. “They destroyed the basic institutions of their society and changed their form of government. What Trump represents is a restoration—a restoration of true American capitalism and a revolution against state-sponsored socialism. Elites have taken all the upside for themselves and pushed the downside to the working- and middle-class Americans.”

Bannon’s revolution is being led by the very people Trump demonized in his final political ads in Rust Belt states—the elite players in American finance and media. No one epitomizes that contradiction as clearly as the billionaire Mercers, and their long embrace of Trump’s new White House strategist, Bannon, who made a fortune at Goldman Sachs and in Hollywood before taking over Breitbart.

Bannon, who grew up in a Democratic household in Virginia, was a Navy veteran who became a Wall Street trader before turning to media. He is among a handful of grantees and causes that have been boosted by multimillion dollar investments or infusions from the Mercer family. Breitbart received $10 million, and in turn, as Politico said, dutifully publicized Mercer grantees and causes, including some of the most notorious right-wingers, such as the activists who made the 2008 anti-Hillary Clinton movie that led to the Citizens United lawsuit and U.S. Supreme Court decision that struck down the few remaining limits on campaign cash.

Breitbart, under Bannon, has relished vulgar attacks on liberals. It’s compared feminists and Planned Parenthood to Nazis, has had anti-Semitic headlines and embraced a spectrum of white supremacist causes. Two decades ago, Bannon’s wife filed domestic abuse charges that were eventually dropped. Early in the campaign, a Bannon-run non-profit, the Government Accountability Institute, astoundingly convinced the New York Times and other mainstream papers to partner with it and publish reports based on its latest attack on the Clintons, a book called Clinton Cash. As Bannon told Bloomberg in an extensive profile later in 2015, that "weaponized" the attacks, because old attacks broke out of the right-wing echo chamber and spread like a virus through the mainstream media.

Establishment Republicans have criticized Bannon's so-called alt-right publications, and he has drawn considerable wrath from Democrats. But his uncompromising posture and no-holds-barred tactics appealed to the Mercers, who saw other libertarian activists, such as the Koch brothers, as being too genteel—despite spending multi-millions against Democrats.

As AlterNet’s February profile of the Mercer family detailed, they embrace virtually every ultra-right posture, from backing the most ardent climate science deniers (Heartland Institute), to reviving the gold standard behind the dollar (American Principles Project), to encouraging physicians to stockpile drugs in response to Obamacare (Doctors for Disaster Preparedness). Their fights with the Internal Revenue Service make Trump’s $900 million write-off in the mid-1990s seem paltry. Mercer’s computerized trading firm, Renaissance Technologies, has spent years fighting a $6.8 billion tax bill, Bloomberg has said.

Family patriarch Robert Mercer is notoriously publicity averse. But one daughter, Rebekah, isn’t, and has become one of the most powerful women in Republican circles. Last summer, according to a series of reports in the New York Times, Politico, The Hill and other  outlets, she persuaded the Trump family—the candidate, his daughter Ivanka and son-in-law Jared Kushner—to replace his campaign team with Bannon and their longtime pollster Conway, and to incorporate their data-mining operation, Cambridge Analytica, to expand the campaign’s voter targeting. That came after a series of conversations at Trump fundraisers and private dinners.

“A few days later, one of the guests, Stephen K. Bannon, the executive chairman of Breitbart News, would become Mr. Trump’s campaign chief in a sudden shake-up,” the Times wrote in mid-August. “But it was a guest without a formal role in the campaign, a conservative philanthropist named Rebekah Mercer, who has now become one of its most potent forces.”

The Times described the family's relationship to Trump’s new team. “Mr. Trump’s new campaign manager, Kellyanne Conway, is a veteran Republican pollster who previously oversaw a super PAC financed by the Mercers. Mr. Bannon oversaw Breitbart, an outlet that has often amplified Mr. Trump’s message and attacked his perceived enemies. Mr. Mercer reportedly invested $10 million in Breitbart several years ago, and most likely still has a stake: A company sharing an address with Renaissance Technologies, the hedge fund Mr. Mercer helps lead, remains an investor in Breitbart, according to corporate documents filed in Delaware.”

“Mr. Trump is also relying on Cambridge Analytica, a voter data firm backed by Mr. Mercer, whose staff members are working with Mr. Trump’s vendors to identify potential Trump supporters in the electorate, particularly among infrequent voters," the Times said. "A Mercer-backed super PAC supporting Mr. Trump is now being shepherded by David Bossie, a conservative activist whose own projects [Citizens United] have been funded in part by the Mercers’ family foundation, according to tax documents. Mr. Bannon has worked particularly closely with the family in recent years.

“I think they have complete confidence, and rightly so, in Steve Bannon’s decisions and what he brings to the table politically,” Bossie told the paper. “He has been smart and successful in running these different political operations. And those things have come to the Mercers’ attention.”

It has become a cliche that no one knows how Trump will really govern because of a lack of specifics during the campaign. But it is clear what libertarians like the Mercers want—to remove any obstacle preventing corporations and the super-rich from enlarging their wealth; and what ideologues like Bannon want—the dismantling of federal safety nets, from the 1930s New Deal to Obamacare, the expansion of policing and immigration enforcement, and no action on climate change to create a post-carbon energy system.

For years, Robert Mercer quietly poured tens of millions of dollars into far-right political causes. But it took his daughter, Rebekah, to embrace the bulls in the GOP china shop—first Cruz and then Trump. When Trump assumes office in January, Bannon will be on the podium. And quietly observing the spectacle will be one of the real powers behind the throne, the libertarian billionaire Mercer family.