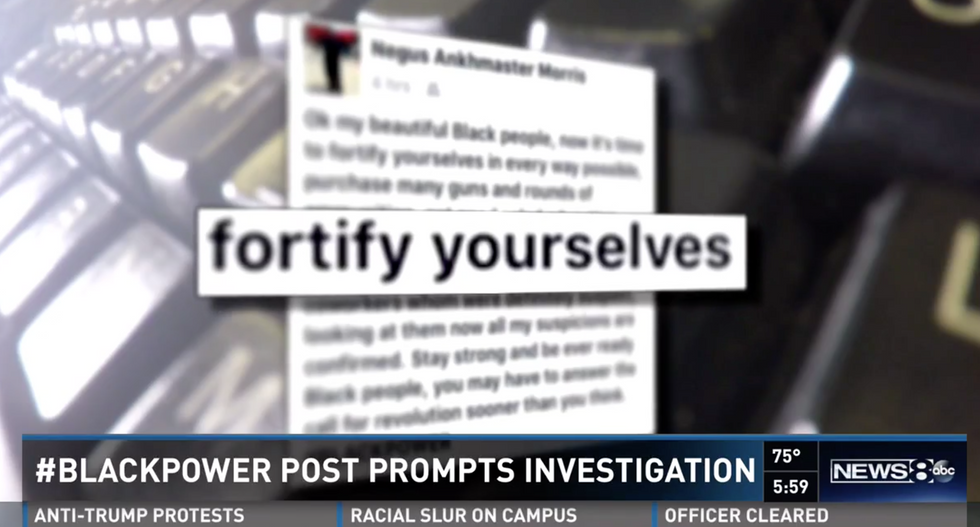 A Fort Worth, Texas police officer was placed on restricted duty Thursday as the department conducts an investigation over a post he made on Facebook calling for black people to “purchase man guns and rounds of ammunition” to “answer the call for revolution.”

“Ok my beautiful Black people, now it’s time to fortify yourselves in every way possible, purchase many guns and rounds of ammunition, get good solod [sic] education, learn this [expletive] political system and be ready,” officer Brandon Morris wrote in a since-deleted Facebook post. “I have been watching a few coworkers whom were definitely suspect, looking at them now all my suspicions are confirmed. Stay strong and be ever ready Black people, you may have to answer the call for revolution sooner that [sic] you think. #BLACKPOWER”

The Fort Worth Police Department Friday said Morris has been placed on restricted duty pending an internal investigation over whether the officer’s words violate their social media policy.

"The officer who posted the comments in question on his Facebook page has been placed on restricted duty status," Chief Joel Fitzgerald said. "In this, and any internal investigation, we will not make any other comments until the investigation is complete.”

Attorney Terry Daffron, who represents Morris, ripped the department’s handling of the case; although the officer has been placed on restricted duty, the agency still has not served him a personnel complaint.

“He’s been told they should have it to him next week,” Daffron told the Charlotte Observer. “The way this case is being handled is mind-boggling. For lack of a better analogy: let’s just put someone in jail and we’ll tell you what crime you committed next week.”

In a statement, the Fort Worth Police Officer’s Association declined to comment on Morris’s case, but insisted the they “will take all steps necessary to ensure that Officer Morris is afforded his right to due process and his right to a fair and impartial investigation of the charges.”

Watch the video below, via WFAA 8.