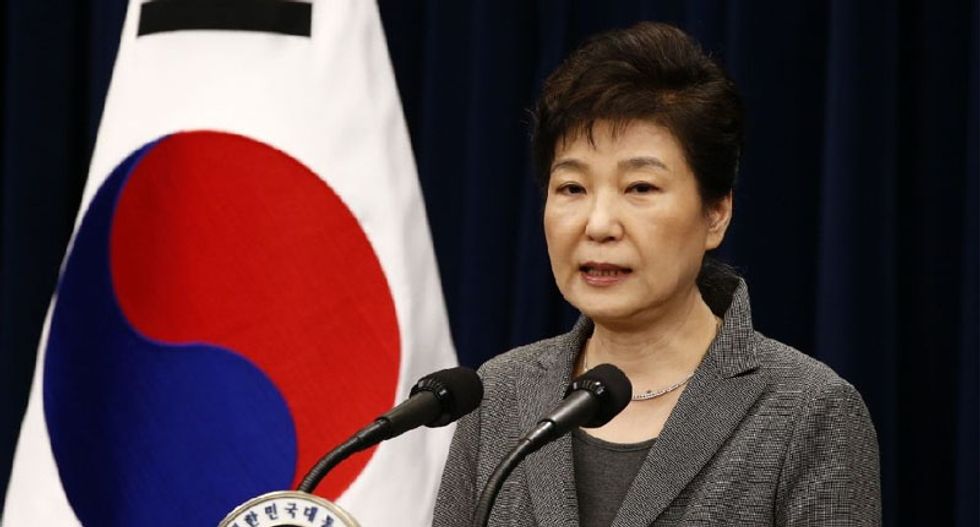 South Korean President Park Geun-Hye enjoyed rock-star popularity for most of her life as a conservative icon -- until an influence-peddling scandal turned her into a target of nationwide anger and sparked the dramatic downfall of the country's onetime "princess".

Park, the daughter of the late military dictator Park Chung-Hee, spent most of her childhood under the spotlight as her father oversaw the country's economic transformation during his 1961-1979 rule.

Images of the young Park growing up at the presidential Blue House endeared her to South Koreans, with the first family treated as royalty by some.

The deaths of Park's parents in the 1970s further fanned sympathy for her as an ill-fated young woman who lost parents to assassinations but managed to rise above the personal tragedy.

Park's mother was murdered five years before her father, who was assassinated by his own security chief in 1979.

Park subsequently kept a low profile for nearly two decades until 1998, when she made a successful bid to become a lawmaker as the South was reeling from the fallout of the 1997-98 Asian economic crisis.

She instantly became a star among older conservative Koreans, who felt she shared her father's leadership qualities and was someone who could revive the economy at a time of crisis.

But her political career was always overshadowed by the legacy of her father -- who is credited with dragging the country out of poverty but reviled for his regime's human rights abuses.

The memory of the father, who seized power in an army coup and ruled with an iron fist, dogged Park, with critics accusing her of inheriting her father's intolerance of dissents.

But Park still commanded a loyal following among many voters, earning her nickname the "Queen of Elections."

Such loyalty helped her weather several crises after she became the country's first female president in 2012, including the sinking of a Sewol ferry that killed 300 in 2014.

The fact that Park, 64, never married was also part of her appeal in a country where past leaders were often embroiled in major corruption scandals involving family members.

But the latest scandal involving Choi Soon-Sil, the so-called "shaman advisor" for Park, turned out to be too much even for the staunchest Park supporters.

It also shed light on Park's questionable, decades-long ties with Choi's late father, a shady religious figure who in the 1970s was accused of using his ties with Park to extract vast amounts of money from local firms.

A state probe claimed that Choi had followed her father's footstep, colluding with Park to coerce local firms to "donate" tens of millions of dollars to non-profit foundations which were then used for Choi's personal gain.

The scandal has sent Park's once-bulletproof approval ratings to record lows and prompted hundreds of thousands to repeatedly take to the streets calling for Park's ouster.

Now Park, the first sitting South Korean president to be subject to a criminal probe, is facing the bleak prospect of impeachment and potential imprisonment if she is forced out -- a disgrace that was unimaginable only a year ago.

"The sense of betrayal is so immense... because I trusted her so much," Kim Young-Rah, a 62-year-old housewife from Daegu, Park's hometown, said during a recent mass protest in Seoul.

Kim said she and many friends of her age looked up to Park as a "princess" during their childhood and later an "ideal, incorruptible" politician who kept her distance even from her own relatives.

"Now it was all fantasy... my fantasy has completely been shattered," she said, waving a banner reading "Throw Park Geun-Hye into jail!"

"I don't even want to see her face anymore."