The next time your right-wing uncle tries to ruin the holidays with 'proof' of creationism, show him these videos 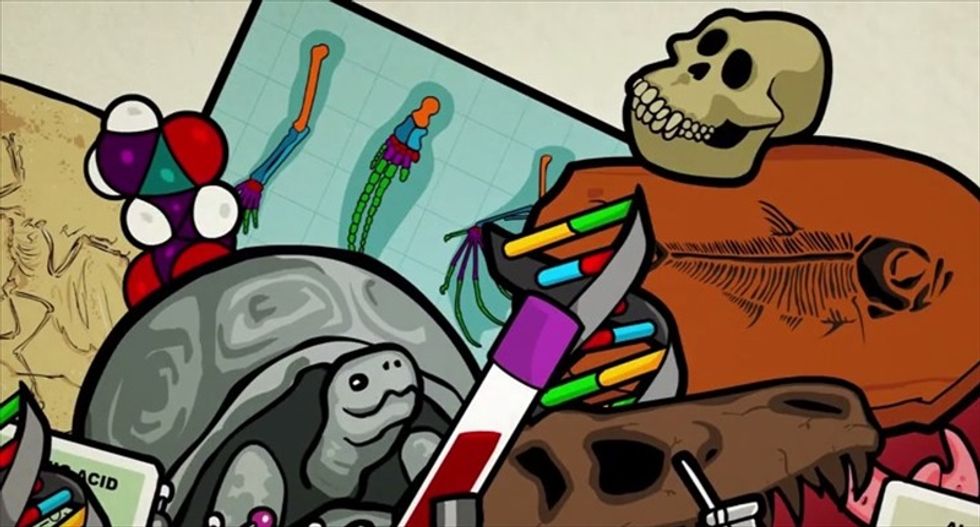 Image from "What is the Evidence for Evolution?" by Stated Clearly [YouTube]

With Thanksgiving fast approaching, no doubt many progressives are dreading at least one part of the holiday ritual -- trying to make peace with that one relative who rejects liberalism. Or science. Or evolution. Or all three.

While The Raw Story can't help with everyone's family dynamic, we can at least offer pro-evolution readers some useful videos to share with the creationist in their lives.

Starting with the basics, Stated Clearly explains evolution itself in this 9-minute video.

"Evidence overwhelmingly suggests that all life on Earth is related," the group's founder, Jon Perry, says in the clip. "So remember, next time you invite family and friends over for a holiday feast, you're actually just inviting family. That includes the turkey, and the pumpkin pie."

Perry's tutorial can be seen below.

For something a bit faster, graphic designer Jurian Möller put together this animated video showing the breadth of human evolution across 550 million years:

Möller also turned the video into a 100-foot-long book illustrating the process through "153 great-grandfathers."

"The differences between the generations on each page are very difficult to see," he writes on the book's website. "But the long, continuous ancestral line goes right back to our very origins."

Finally, we turn to a reliable champion of evolution in "Science Guy" Bill Nye. If you don't have time to watch his entire debate with Creation Museum founder Ken Ham, then we recommend this short video on how creationism can hurt children.

"I say to the grownups, if you want to deny evolution and live in your world, in your world that's completely inconsistent with everything we observe in the universe, that's fine," Nye argues. "But don't make your kids do it because we need them. We need scientifically literate voters and taxpayers for the future. We need people that can—we need engineers that can build stuff, solve problems."