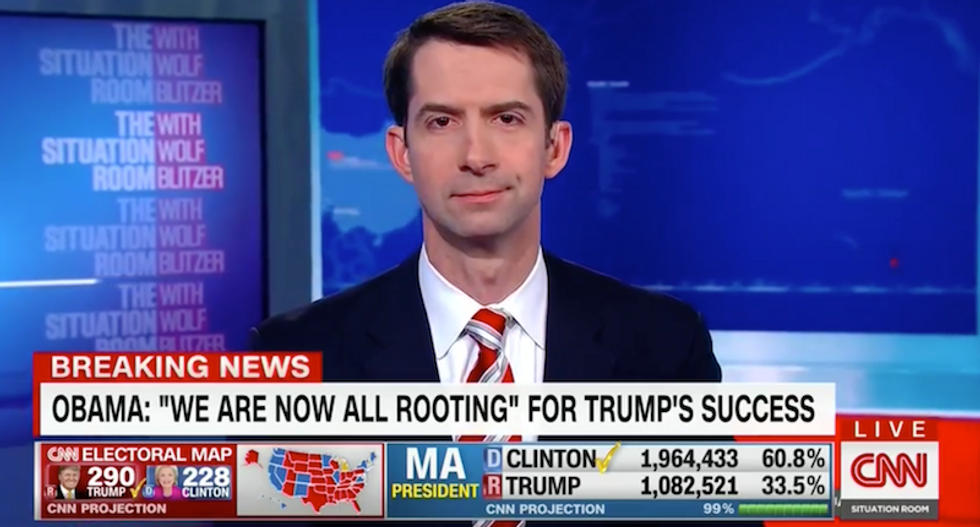 Blitzer asked Cotton how he would respond if Trump offered him a spot in his administration. "He's going to need a lot of allies in the Senate when it comes to the military and building the wall and repealing Obamacare," Cotton said.

Cotton responded, "Donald Trump promised that we're going to build a wall. We've needed one for a long time. We need more than that. We need to enforce immigration laws, we need to eliminate sanctuary cities, where cities have illegal immigrants that they don't turn over to federal authorities."

"I strongly support those proposals," Cotton continued. "We have to move further, I think, and re-evaluate our entire immigration policy because right now when we have so many folks who work with their hands and on their feet and haven't had a raise in decades in real dollars, we need to rethink whether we should be admitting a million new green card holders a year in this country and a million more visa holders."

And on the matter of the country accepting Syrian refugees who are fleeing violence, Cotton said, "We have to make sure that anyone who comes into this country is not going be a security risk to americans. Also, I think we need to take stock of whether we should be admitting the 450,000 refugees that President Obama admitted last year."