Trump is 'going to do to you Muslims what Hitler did to the Jews': California mosque threatened 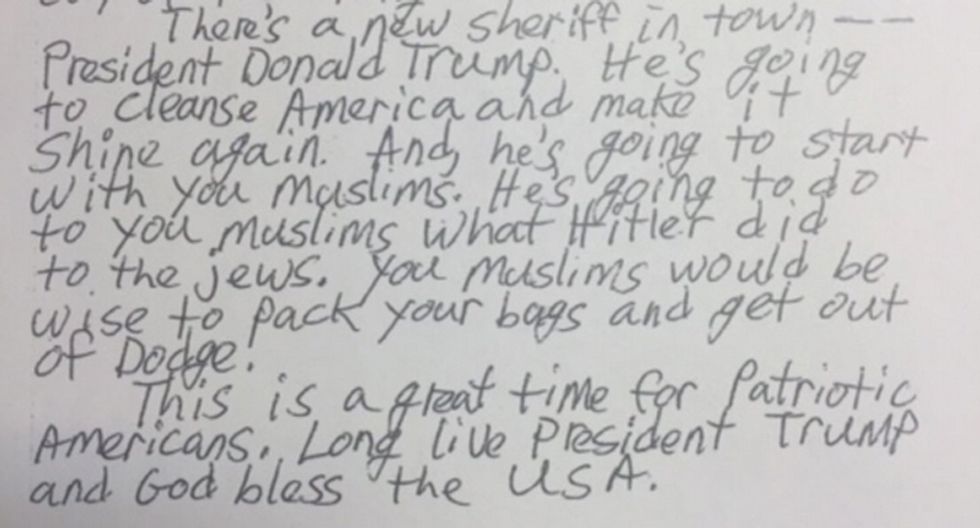 Police in San Jose, California are investigating a letter threatening a local mosque and telling members of the religious center to "pack their bags and get out of Dodge," now that "new sheriff" Donald Trump is in town.

The letter arrived at the mosque on Wednesday and was addressed to "The Children of Satan," saying, "You Muslims are vile and evil people .... and your day of reckoning has arrived," reports ABC7.

Referring to President-elect Donald Trump, the letter continued, "He's going to cleanse America and make it shine again. And he's going to start with you Muslims. He's going to do you Muslims what Hitler did to the Jews," before concluding, "This is a great time for Patriotic Americans. Long live President Trump and God less the USA.'

The letter was signed, "Americans for a Better Way."

According to Evergreen Islamic Center Board President Faisal Yazadi, the letter was turned over to local police who also responded to the center on Thursday based upon reports of suspicious activity.

"We wanted to let law enforcement know so that in case there's an unfortunate event people are prepared," Yazadi said, adding, “Our doors are never locked. I hope that person knows that we’re more than happy to have a dialogue. Hopefully, we learn a thing or two from him or her, and he or she learns something from us.”

According to Sgt. Enrique Garcia, spokesman for the San Jose Police Department, the incident is being treated as a "hate-motivated incident."

A screenshot of the letter below: