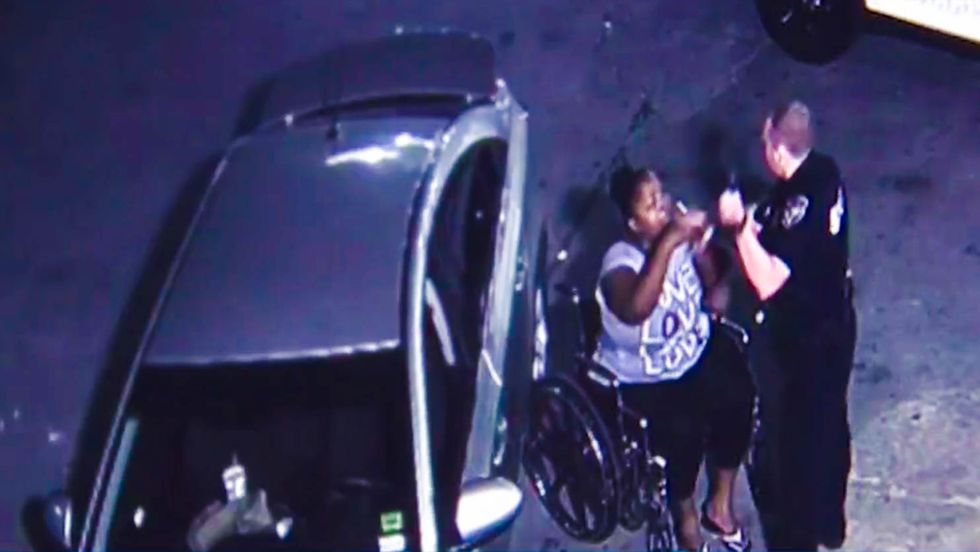 36 year-old Sheketha Holman, left, gets into an argument with a Houston police officer (Screen cap via KHOU)

The Harris County Sheriff’s Office is launching an investigation after police officers in Houston tased a wheelchair-bound woman as she was arguing with them.

Local news station KHOU reports that 36 year-old Sheketha Holman was at a gas station in northwestern Houston earlier this month after she had received a phone call from her pregnant daughter's boyfriend, who informed her that her daughter was in trouble with police.

When Holman arrived on the scene, she saw her daughter being arrested for allegedly possessing marijuana, and she yelled at the officers to be careful with her because she was pregnant. The officers told her to leave the area, and she began getting into a heated argument with them.

Eventually the officers tried to arrest her and tried to get her to put her hands behind her back. Even though she told them this was impossible for her to do while in the wheelchair, they tried to lift her out of the wheelchair anyway so they can handcuff her.

This proved unsuccessful, and at one point she appeared to try to push the officers away from her. It's at this point that one of the officers shocked her with a Taser, which knocked out of her chair and onto the ground.

"When I came to, I was like face down or whatever, and my leg was underneath me," Holamn told KHOU. "They still was Tasing me, man. That’s wrong."

Watch a video report of the incident below.