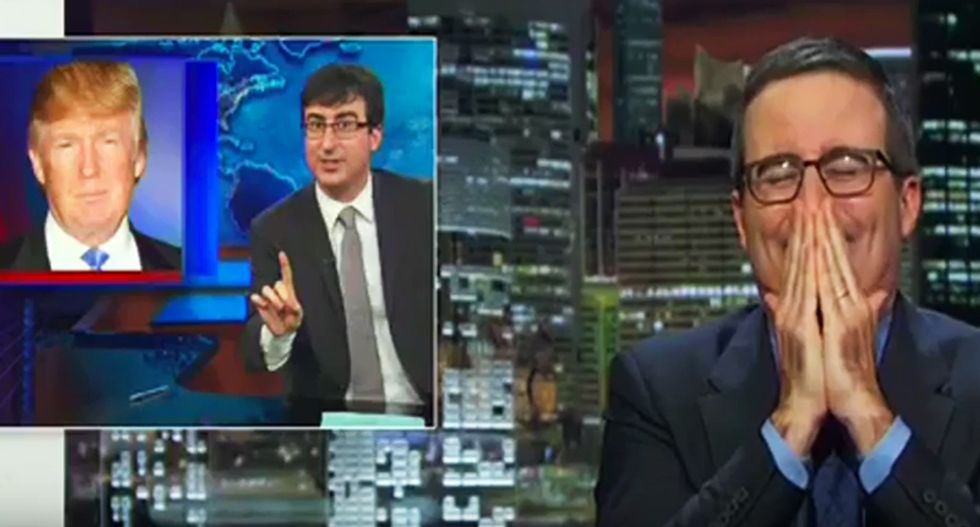 For those still wondering why Donald Trump decided to run for president, HBO host John Oliver dropped a bombshell Sunday night with a film clip of a young Daily Show reporter practically begging the blustery businessman to make both of their dreams come true.

Less than 36 hours before Election Day, the Last Week Tonight host was still incredulous that GOP presidential nominee Donald Trump has a very real possibility of winning on Tuesday.

'We are at a point where this man has a genuine shot at the presidency," Oliver explained. "Despite having blown up a political party, undermined confidence in our political system, declared open season on journalists and unleashed a river of racism and misogyny."

"Also, and I feel like we have lost sight of this: he has really stupid hair. It's important to remember that."

"It is frankly hard to believe that there was a time when people thought a Trump candidacy would be funny," he continued. "Because there was such a time. As you may remember, three years ago I guest hosted the Daily Show and, well, there is something you should see."

With that, Oliver shared a clip of himself telling Trump "I badly want you to run," and even offering to write a check to Trump for his campaign.

Cutting back to current day Oliver, he remarked,  "Now, in my defense I have no defense for that and was hoping to think of one before finishing this sentence which, oh shit, it's over."