WATCH: Michael Moore explains how the Democrats lost the Midwest to Trump 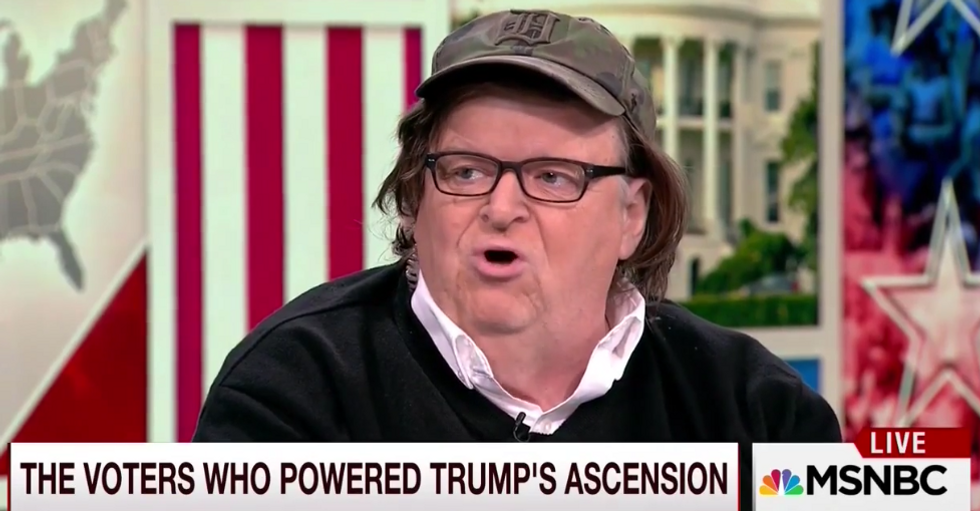 Michael Moore talks about Democrats in the Midwest on 'Morning Joe' (Screen cap).

Michael Moore appeared on Morning Joe on Friday to drop some hard truths about how Democrats have paid a price for ignoring "Rust Belt" voters whom Trump won over as he swept through Pennsylvania, Wisconsin and Michigan.

Moore said that while he greatly admires President Obama, he cringed when the president came to his hometown of Flint, Michigan and drank a glass of tap water to assure people that everything was okay.

"He showed up to Flint five months ago and drank the water when it was still not fixed," Moore said. "The pipes are still not replaced! He drank the water to say, 'It's all okay, everyone.' And it was like a knife in the heart of the people of Flint."

Moore said that many liberals were reluctant to hammer Obama for this behavior at the time because we like him and he already gets attacked so much. At the same time, he says it was reflective of an overall tone deafness within the Democratic Party toward many voters who don't live on the coasts.

Moore then went on to talk about how the Democrats had treated the mother who asked a question about the Flint water supply during a Democratic debate between Hillary Clinton and Bernie Sanders this year. He noted that the woman was horrified after she found out that her question had been leaked in advance by Donna Brazile to Hillary Clinton.

"She learns that she was just a prop, and that Donna Brazile had leaked her question to the campaign," he said. "So she's on TV, the week before this election, saying, 'I was used.'"

Moore then notes that Hillary only lost the vote in Michigan by 11,000 ballots because many traditional Democratic voters in the state simply could not back her.

"90,000 Michiganders voted for every office and every ballot proposal on both sides of the ballot -- and refused to vote for president," he said. "They were not going to vote for Trump... but they had refused to participate in a system that had left them forgotten."

The entire segment is worth watching and can be found below.