WATCH: Rand Paul shoots down all of Trump's rumored Secretary of State choices 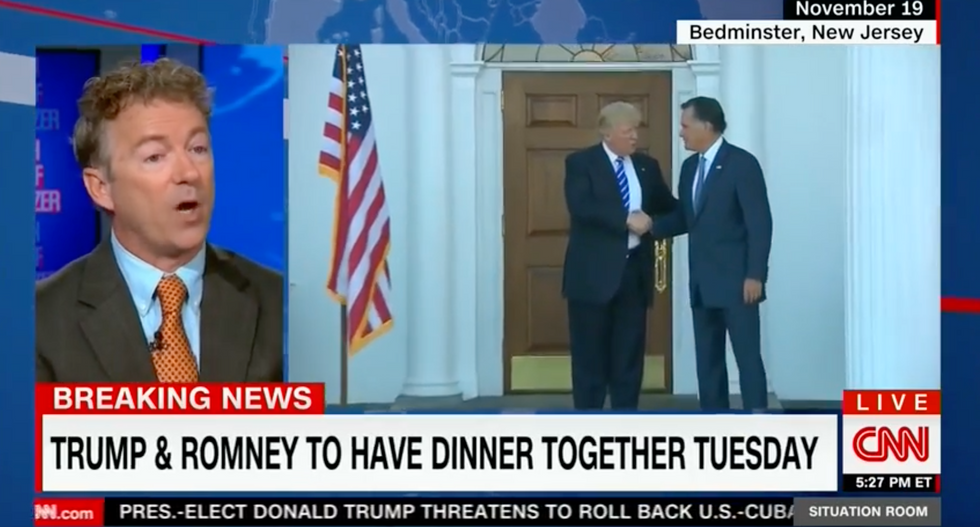 Rand Paul Monday spoke with Wolf Blitzer about Donald Trump’s rumored choices for Secretary of State, insisting his main concern is whether the president-elect’s pick “understands the historical significance of the failure in Iraq and that we don’t repeat it.”

Discussing Mitt Romney, who will meet with Trump for dinner in New York this week, Paul iterated that his top priority is whether the Secretary of State fully understands the failure of the Iraq war, nation-building and regime change.

"I'm unsure about where Romney is on this," Paul noted.

Paul also argued if Trump chooses General David Petraeus, who attended a meeting at Trump Tower Monday, critics might comment on the hypocrisy over his mishandling of classified information.

“[Republicans] spent a year and a half beating up Hillary Clinton over revealing classified information and then they would appoint somebody who the FBI says not only revealed it but then lied about it in an interview?” Paul asked, later adding, “I think that’s a potential problem.”

Paul said he wants “Donald Trump to pick someone who agrees with Donald Trump,” and parrots the president-elects non-interventionist campaign promises.

“Donald Trump said nation-building was a problem, regime change was a problem, the Iraq War was a mistake,” Paul continued. “I want someone who fully understands that.”