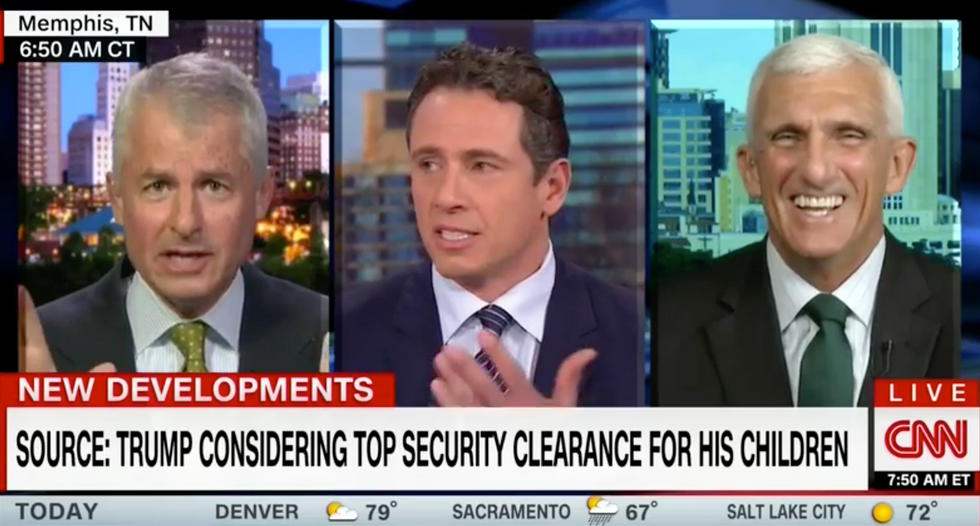 An exasperated Chris Cuomo Tuesday battled former CIA counterterrorism official Phillip Mudd for refusing to answer his question, even as Mudd told the CNN New Day host to “be quiet son, and I’ll give you an education.”

Speaking with Mudd and CNN contributor Lt. General Mark Hertling, Cuomo asked what concerns Mudd has over reports that president-elect Donald Trump is seeking security clearance for his kids.

“I don’t have a key concern right now,” Mudd said adding he does find the request “odd.”

“But let’s change the conversation for a second Chris,” Mudd continued.

“No, answer my question: What are the issues?” Cuomo pushed back.

“Well will you be quiet? The big ugly—“ Mudd said, as Cuomo threw his hands in the air. “You need to be quiet son, and I’ll give you an education.”

Mudd argued Trump’s “key advisors” happen “to be his kids and son-in-law,” adding the intelligence community doesn’t “tell the president who they can bring in the room.”

Turning to Hertling, Cuomo made an unsubtle dig at Mudd:

Cuomo: General, do you see how I bring people on to the show to educate others even when they’re personally abusive of me? Do you see the dedication to my craft?

Cuomo: Thank you very much, general. Your opinion I actually respect.