A decade later, Saddam 'lives on' in Baghdad shop 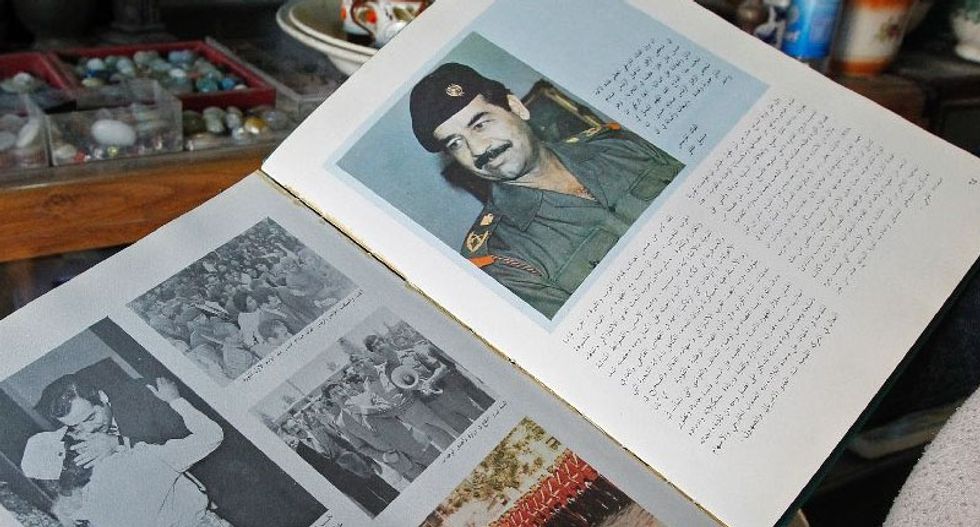 A shopkeeper leafs through a book containing photos of late Iraqi president Saddam Hussein at his shop in the capital Baghdad on December 28, 2016 (AFP Photo/SABAH ARAR)

Baghdad shopkeeper Anwar offers Saddam Hussein photos, coins and postage stamps that keep the ousted president alive 10 years after his execution and cater to customers nostalgic for his rule.

While Saddam was brutal to those who opposed him, and led his country into two disastrous wars, there are those who still look back fondly on his time in power, especially in comparison to the years of devastating internal violence and ineffective governance that followed his overthrow in 2003.

In his antique shop, Anwar proudly caresses a leather holster stamped with the words: "On behalf of President Saddam Hussein."

"It was a gift that Saddam gave to deserving officers," said Anwar, who may be his own best customer for Saddam memorabilia.

"I am constantly looking for items related to Saddam, but when I find them, I often keep them for myself," said the young man, who mainly trades in more innocuous, non-political items.

Offering a line of reasoning often used to support the ex-president, Anwar said: "Saddam Hussein knew how to control the country."

"And I say this as a son of the south," he said, indicating that he is a member of Iraq's Shiite majority, which along with the Kurds was the target of deadly oppression under Saddam's rule.

It was for the 1982 killing of 148 Shiite villagers in Dujail that Saddam was found guilty of crimes against humanity, a verdict that led to his execution by hanging on December 30, 2006.

That was "the day of the end of the head of the snake that reduced Iraqis to the rank of humiliated citizens", said Khalaf Abdulsamad, a lawmaker from the Shiite Dawa party which has held the Iraqi premiership since 2006.

Saddam countered dissent with prison, torture and death, started a disastrous 1980-1988 war with Iran, and invaded Kuwait in 1990, leading to years of punishing sanctions.

But his rule also offered stability, quality education, health care, employment and services for most of the population -- commodities that have often been in short supply in the years since his fall.

- 'From serpent to serpents' -

The 2003 US-led invasion of Iraq unleashed years of sectarian violence, including frequent bombings, kidnappings and executions that peaked from 2006-2008.

That violence was sharply reduced by the combination of Sunni Arab tribesmen joining forces with American troops, and the US military's "surge" of additional forces in Iraq.

But it was not to last: violence steadily rose in the years after the US military withdrew in 2011, driven in large part by widespread anger among Iraqi Sunni Arabs with then-premier Nuri al-Maliki's government.

Maliki's heavy-handed response to anti-government protests led to the loss of control of one entire city and shifting parts of a second in early 2014.

That was followed six months later by a sweeping offensive by the Islamic State jihadist group, which overran swathes of territory north and west of Baghdad.

Iraqi forces have pushed the jihadists back, but doing so has devastated Sunni Arab cities and towns, laying the groundwork for further discontent and conflict.

In Anwar's shop, Abu Osama looks at stamps bearing Saddam's image and a book of photos of the ousted dictator.

He is a Sunni who served as an officer in Saddam's army, but said he is not a supporter of his former commander-in-chief.

"But I love justice, and we are sorely lacking it today," Abu Osama said.

He did not buy anything from the shop, his memories of Saddam's rule preserved in photos he has at home.

The new political class that took power after Saddam's fall has done little to endear itself to many Iraqis, even outside its repeated failure to secure the country.

Corruption is rampant, basic services such as electricity and water sorely lacking, and government riven by sectarianism and political infighting.

Months of protests in Baghdad and elsewhere drew repeated pledges that reforms would be carried out, but little in the way of real or lasting change has taken place so far.

Ilaf, a law student who was visiting Anwar's shop, criticised both Iraq's past and present leadership.

"Saddam Hussein was an enormous serpent," he said.

"Today, it is a multitude of small serpents that lead us."