Air pollution expert: why Christmas may be the most toxic day of the year 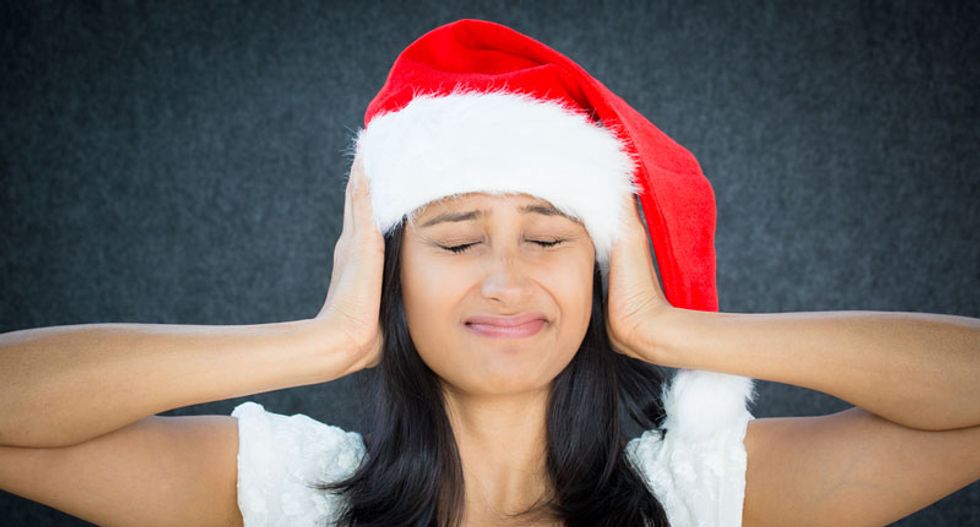 On Christmas Day in 1879 the combination of fog and smoke was so dense over London that it was virtually dark at noon. Nowadays, with many people staying at home and fewer vehicles on the road, the ambient air quality on Christmas Day is typically very good. However air in the home may be at its worst.

On Christmas, indoor sources of air pollution can generate particles that, in terms of number and mass concentrations, significantly exceed background levels. Here are a few reasons why.

Cooking the traditional Christmas dinner can result in elevated levels of a number of pollutants. Ultrafine particles (UFP) smaller than 100 nanometres are of special interest from a health perspective, since they can penetrate deep into the respiratory system and cause inflammatory effects. A number of studies have reported increased UFP concentrations associated with electric stoves and cooking utensils, perhaps from heating detergent residues.

The number of particles emitted during cooking depends upon factors such as the raw food composition, cooking temperature and style – stirring food has been shown to produce larger aerosols as the ingredients are splashed about and tiny specs fly into the atmosphere. 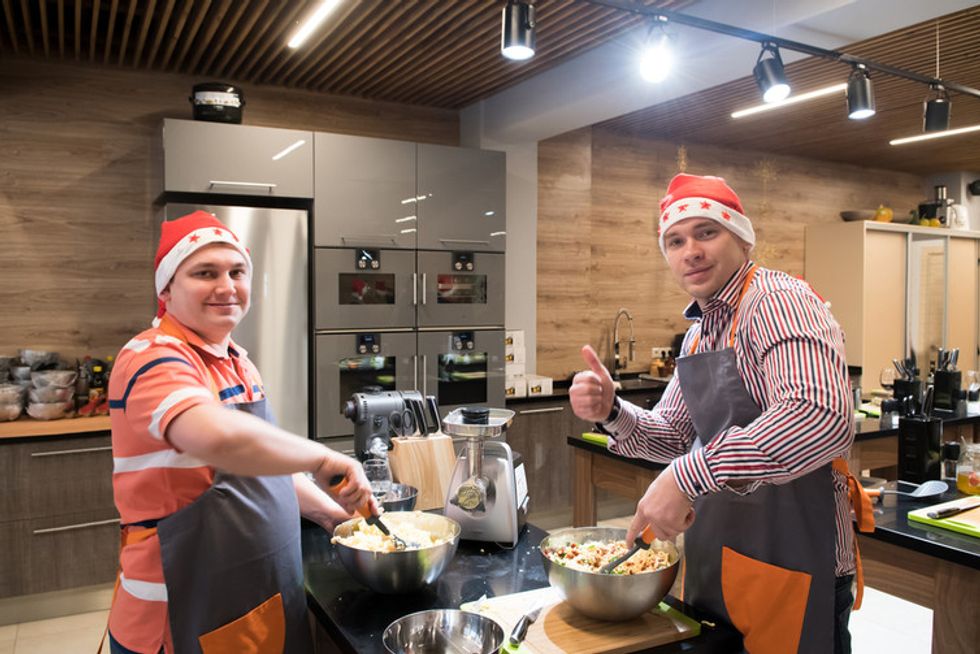 Gas cooking is a major source of both nitrogen dioxide (a harmful gas) and particulate matter (tiny, often hazardous particles suspended in the air). Kitchens with gas cooking can have higher levels of nitrogen dioxide than even a busy roadside.

In fact it has been shown that gas cooking is associated with increased risk of both current and lifetime asthma.

The health risks associated with cooking are poorly understood, although UK regulations require extractor fans in kitchens. Given that it takes more than four hours to prepare and cook the average Christmas dinner, people with asthma or cardiovascular disease may want to avoid the kitchen. When cooking, especially with gas, it is important to keep the extractor fan on or open a window.

See the blazing yule before us

Wood burning is becoming more popular – often for aesthetic reasons – and this releases significant amounts of particulate pollution into the outdoor environment. Wood smoke is a significant reason why many cities are exceeding European air quality limits during winter. In Denmark, emissions from wood-burning stoves are calculated to cause 400 premature deaths every year, while in London it accounts for between 7% and 9% of wintertime particle pollution.

Studies have also shown wood smoke can enter neighbouring homes. Even if wood is burnt in modern stoves rather than open fires, start-up, stoking and reloading can still cause high emissions. Smoke from firewood contains hundreds of compounds which can cause cancer, mutations or defective pregnancies.

To reduce emissions allow wood to season before burning it. Keep it dry as it burns most efficiently when its moisture content is below 20%.

The dark side of candles

The use of candles to create a warm, festive atmosphere is common in homes over Christmas. While they look attractive, once lit, they emit ultrafine particles which may contain metals released from the colour pigments. Soot can also be produced, typically when the candle flame flickers due varying air flows. 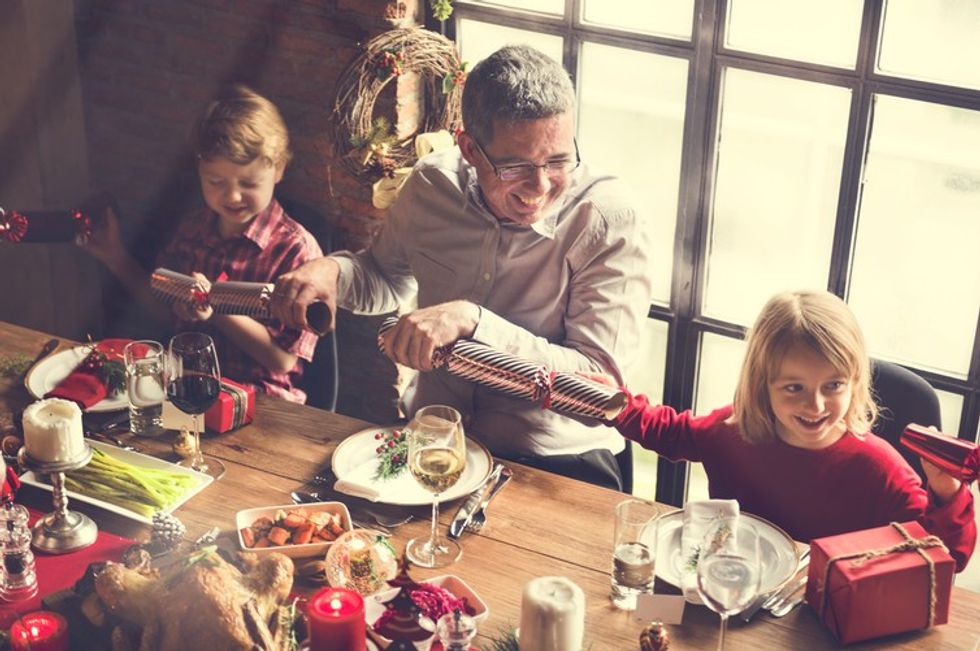 Scented candles are even worse as they release various volatile organic compounds (VOCs), identified by the EU as priority indoor pollutants. However certain house plants can help clean up these compounds.

Party poppers are an often overlooked source of indoor air pollution. In Britain, they are classified as fireworks. While the impact of fireworks outdoors is well documented detailed knowledge of how it affects the indoor environment is lacking. Although party poppers are short lived, they can generate large concentrations of ultrafine particles.

The figure below shows the result of 10 party poppers in a typical dining room. Particle concentrations are more than 100 times higher than those at the roadside and these levels can persist for some time. 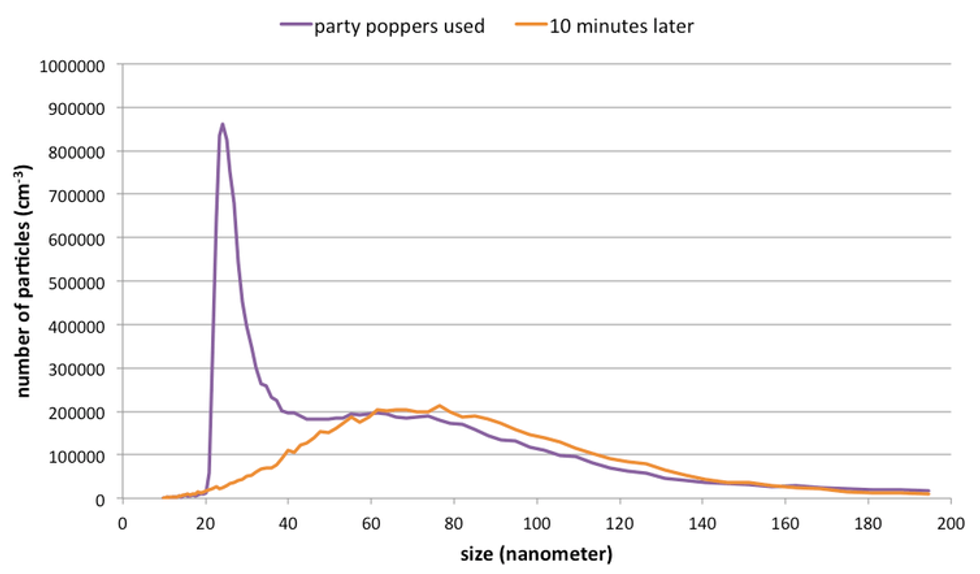 Popper pollution peaks at more than 800,000 tiny particles per cubic centimetre (busy roadsides peak at around 2,000).

It also needs to be remembered that many household activities such as sweeping, hoovering, or even simply moving about, can generate larger particles – although hopefully no one is cleaning the house on Christmas Day. But if you are particularly worried about indoor air pollution a low-cost sensor would make an excellent scientific stocking-filler.