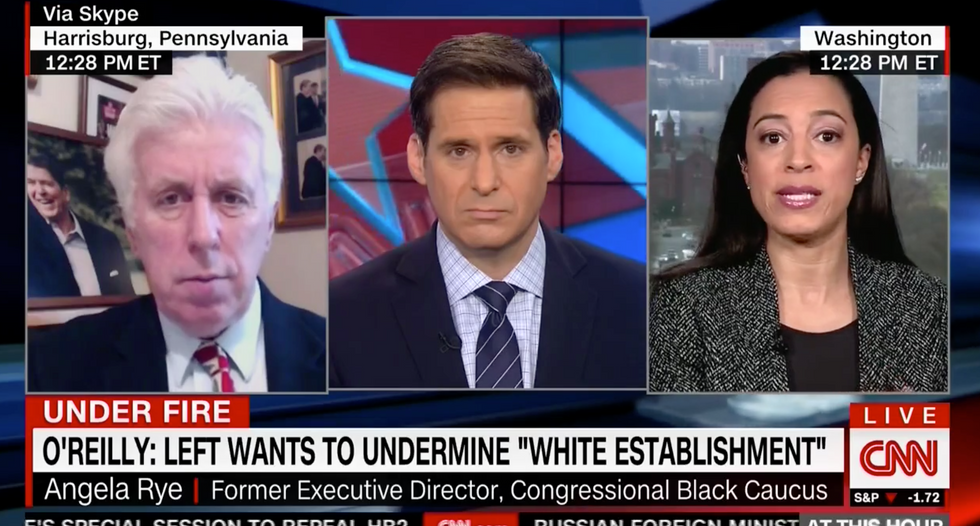 CNN political commentator Angela Rye schooled Donald Trump supporter Jeffrey Lord on the origins of the Electoral College, slamming his assertion that “a culture of racism” permeates the Democratic party.

Discussing conservative commentator Bill O’Reilly’s Tuesday night rant against Democrats’ calls to abolish the Electoral College and take away power “from the white establishment,” Lord agreed with O’Reilly’s assertion, arguing the Democratic party has always “been the party of race.”

“What I am certain of is that the Democratic party, since it’s inception, has been the party of race,” Lord said. “There is a culture of racism within the Democratic party that has been there from the get-go. This is … the party of slavery, segregation, lynching, the Ku Klux Klan, and now it’s racial quotas, illegal immigration by skin color. They’re obsessed with race.”

“They’ve become a party of rich liberal elites,” he added.

“So… yeah” a visibly confused Rye began, noting she doesn’t understand Lord’s “line of thinking” with regards to a Democrat-specific race issue.

“We know that racism in this country is a bipartisan and a nonpartisan issue, it has nothing whatsoever to do with party,” she explained, before launching into a history lesson on the origins of the Electoral college:

“As it relates to Bill O’Reilly, what I will tell you very plainly and simply is this: the Electoral College is problematic from its inception and something that was built upon and designed to oppress certain people.”

Rye argued that just because a tradition has been around for hundreds of years “does not make the thing right,” adding “it is okay for us to ask questions, particularly when we know the Electoral College was built upon a system to protect the interests of slave states.”

“We would be remiss if we did not acknowledge that horrible history,” Rye concluded.

“It’s called the United States of of America,” Lord replied, before suggesting the country should return to a system where elected officials choose the president.

Watch the vide below, via CNN: