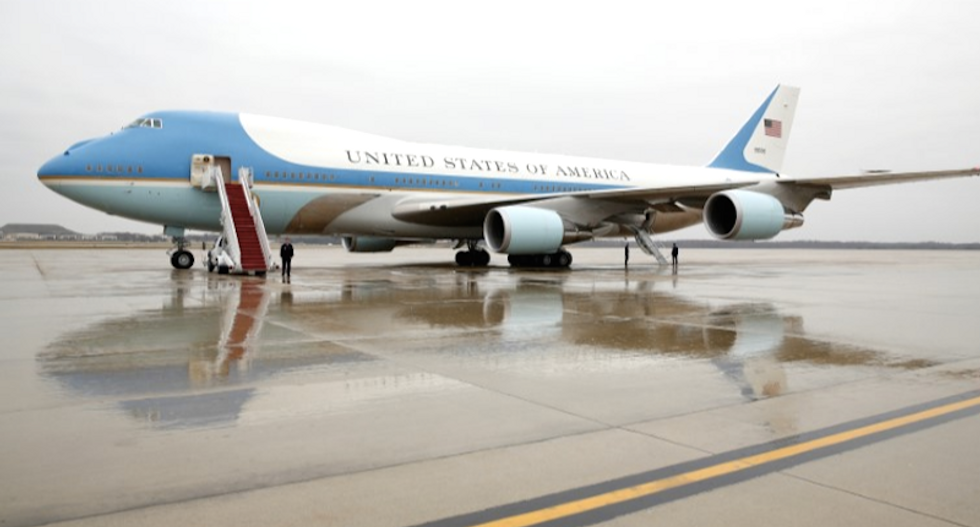 Air Force One sits on the tarmac at Joint Base Andrews in Maryland U.S. December 6, 2016, the same morning that U.S. President-elect Donald Trump urged the government to cancel purchase of Boeing's new Air Force One plane saying it was "ridiculous" and too expensive. (REUTERS/Kevin Lamarque)

U.S. President-elect Donald Trump extracted a promise from Boeing Co's chief executive on Wednesday that the cost of replacing Air Force One would not exceed $4 billion, his latest move to use the bully pulpit to pressure companies to help advance his economic agenda.

Trump met with Dennis Muilenburg of Boeing and Marillyn Hewson, chief executive of Lockheed Martin Corp - two defense companies he has made an example of since his Nov. 8 election, sending defense shares tumbling with his complaints about projects he said are too expensive.

He paraded the two CEOs in front of the cameras at the ornate front door of his Mar-a-Lago resort in Palm Beach, Florida, where he is spending Christmas.

"Trying to get the costs down, costs. Primarily the (Lockheed Martin) F-35, we're trying to get the cost down. It's a program that's very, very expensive," Trump told reporters after meeting with the CEOs and a dozen Pentagon officials involved with defense acquisition programs who he said were "good negotiators."

Trump, who takes office on Jan. 20, has vowed to address government procurement costs as part of his industrial policy, which also includes taking a hard line on Chinese trade practices and renegotiating multilateral trade deals.

Also on Wednesday, Trump named economist Peter Navarro, an economist who has urged a hard line on China, to head up his White House team on industrial policy.

He also appointed billionaire investor Carl Icahn as a special adviser on regulatory issues, and said Icahn would help him choose the next chairman of the Securities and Exchange Commission.

Muilenburg, whose company was caught off guard by Trump's broadside earlier this month on the costs for replacing aging Air Force One planes, called his meeting "productive" and spoke admiringly of Trump's "business head-set."

Trump has said Boeing's costs to build replacements for Air Force One aircraft - one of the most visible symbols of the U.S. presidency - are too high and urged the federal government in a tweet to "Cancel order!"

"I think we're looking to cut a tremendous amount of money off the price," Trump said on Wednesday.

The Boeing 747-8s are designed to be an airborne White House able to fly in worst-case security scenarios, such as nuclear war, and are modified with military avionics, advanced communications and a self-defense system.

The company is currently under contract for $170 million to help develop plans for the planes.

Trump has said the planes, which are in the early stages of development and are not expected to be ready until 2024, would cost more than $4 billion.

“We’re going to get it done for less than that, and we’re committed to working together to make sure that happens," Muilenburg said, telling reporters he gave Trump a "personal commitment" that costs would not run out of control.

Trump has publicly pushed other corporations to change tack, taking credit for forcing United Technologies Corp and Ford Motor Co to alter plans to outsource jobs abroad. Ford, however, said it had no plans to close any U.S. plants.

Asked whether he had secured concessions from Lockheed Martin on its F-35 fighter jet program, which he has complained was "out of control," Trump said it was to soon to know.

Lockheed Martin CEO Hewson, who left Mar-a-Lago without speaking to reporters, said in a statement that her meeting was "productive" and gave her the opportunity to talk about progress in cutting costs.

"The F-35 is a critical program to our national security, and I conveyed our continued commitment to delivering an affordable aircraft to our U.S. military and our allies," Hewson said.

The costs of the F-35s, used by the Marine Corps and the Air Force, and by six countries, have escalated to an estimated $400 billion, prompting it to be described as the most expensive weapon system in history. [nL1N1E717N]

Among the Defense Department officials who met with Trump was Lieutenant General Chris Bogdan, the F-35 program chief for the Pentagon.