California congresswoman declares war on Trump: 'I'm going to fight him every inch of the way' 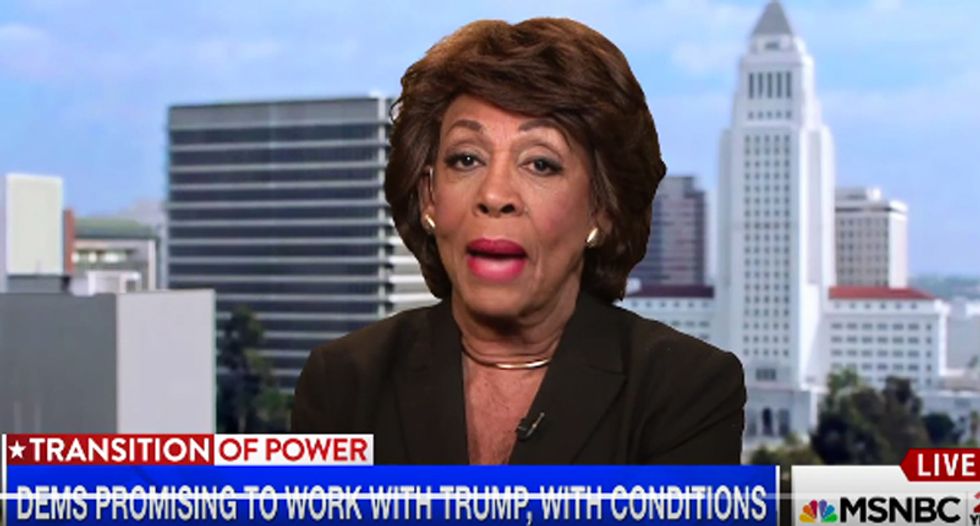 Appearing on MSNBC, a California congresswoman made it absolutely clear that she has no intention on working with President-elect Donald Trump,  saying there is no reason to trust him and that she will "fight him every inch of the way."

In an interview with host Jacob Soboroff, a feisty Rep. Maxine Waters (D-CA) was unrelenting in her attacks on Trump saying she would refuse to meet him if he asked her to sit down with him.

Asked by Soboroff if "Democrats are being way too nice" to Trump, Waters unloaded on the president-elect.

"I tell you, that has been a problem in my party," Waters replied. "That when we're in power, we're nice. We bend over backwards to work with people. Trump has stepped over everybody. He has no respect for his own colleagues, let alone those on the opposite side of the aisle.”

"He's called names, he's lied. Everything to show that he doesn't have good values and he can't be trusted," she continued. "Why should we work with someone that we can't trust? He'll tell you one thing today and another tomorrow. As a matter of fact, those people who voted for him ought to be really concerned about the fact that he has already backpedaled on so many of the promises he made. And so, I have no intention of pretending everything is alright, that we're going to work together."

"As a ranking member of the Financial Services Committee, where he said he's going to bring down Dodd-Frank and he's going to get rid of the Consumer Financial Protection Bureau, I'm going to fight him every inch of the way."

"Are you saying then that you would not sit down with President-elect Trump if he invited you to the White House to meet on common ground?" Soboroff pressed.