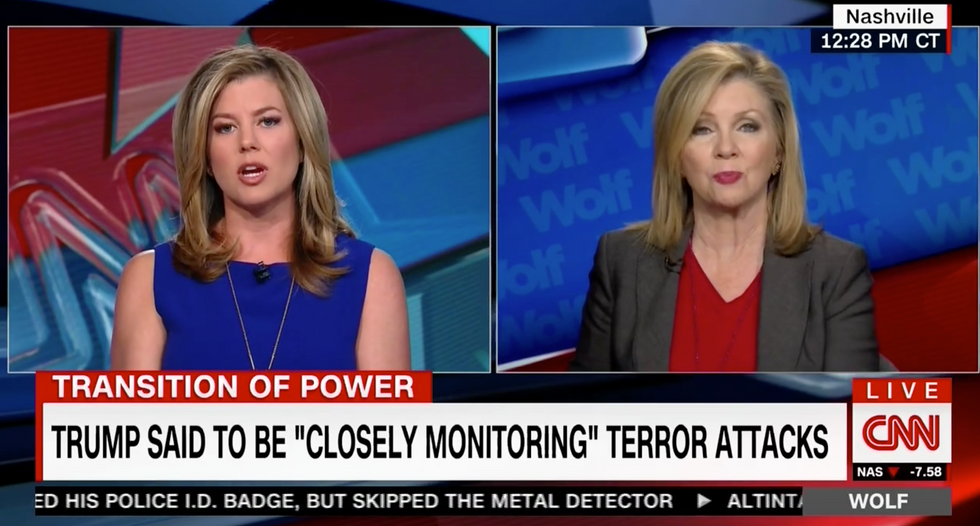 CNN host Brianna Keilar sparred with Tennessee Rep. Marsha Blackburn on Wednesday over the vetting process for Syrian refugees, with Keilar refusing to allow the GOP congresswoman to sidestep whether she knows of specific instances where refugees are “coming into the communities” of unsuspecting citizens.

“One of the things that I’m hearing from women, especially, is their deep concern over public safety and making certain we are dealing with the terrorist cells that are located in the United States.” Blackburn said. “They’re concerned about what is happening with the refugees and the realization by many people that our governors and our mayors do not know when refugee populations are coming into the communities.”

As Blackburn tried to argue “many of these individuals are not vetted.”

Keilar hit back: “Can I stop you on that, really quick? Because you said many refugees are not vetted, and I know certainly there are concerns. The vast majority of refugees are peaceful, there are many people argue there are risks when you open yourself up to people coming into the country. But you say they're not vetted and yet, I’ve gone through the process and it’s pretty extensive.”

Keilar has been an American citizen since birth but was born abroad.

Blackburn responded that Keilar should visit reception centers to “see firsthand” that the government “can’t keep track of who’s coming in” and don’t properly analyze refugee’s backgrounds before admitting them into the U.S., a claim that has no basis in fact.

“When there is someone and they don’t know who they are or where they’re coming from, they don’t let them in,” Keilar informed the Republican representative, later asking: “Do you know of specific instances where people are completely bypassing what is actually a quite labyrinth process to get into this county?”

A back and forth ensued with Keilar pressing Blackburn for specific examples of refugees infiltrating the United States unbeknownst to citizens and leaders.

“I would encourage you to go and look at some of the reception centers and talk with some of the case workers,” Blackburn repeated.