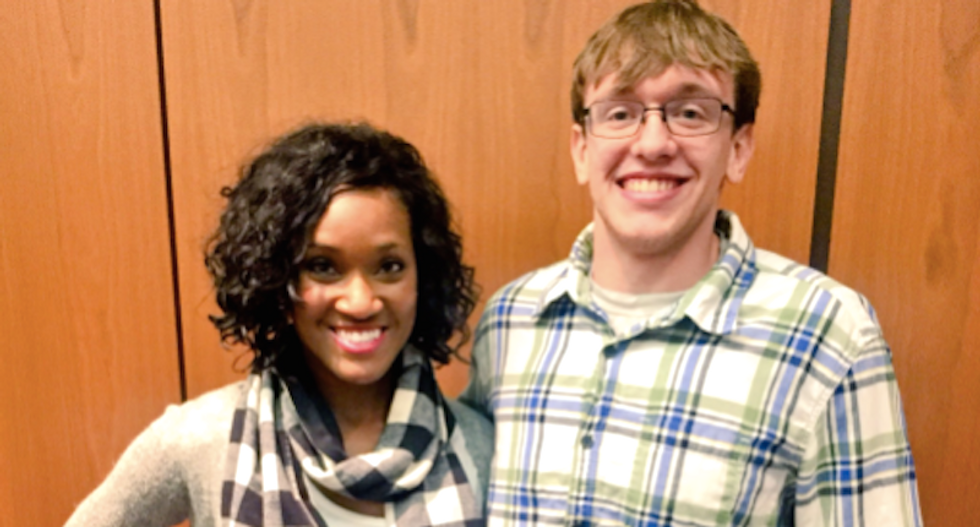 Leanna E. meets with teen who called her a racial slur (Twitter)

An Indianapolis Colts cheerleader blames the "Trump effect" for a teenager insulting her with a racial slur on social media.

The cheerleader took part in a community activity last week with students from Howard County's Western School Corporation and posed with another cheerleader from her squad and two teenage boys, reported the Indianapolis Star.

One of the boys posted the photo on Instagram, along with a racist caption griping about his friend and the black cheerleader: “Of course Mason put me next to the n****r."

The story gained national attention, and the school apologized to the cheerleader and the Colts.

The cheerleader said it "broke my heart" to learn the student was not doing well, the newspaper reported, and had received physical threats, so she asked to meet with him.

The cheerleader, who uses the name Leanna E. in public, and her coach met with the boy and his mother, who she said greeted her with a hug and flowers.

"I extended my hand to shake, and he was like, 'Come on, bring it in, bring it in,'" Lenna told the newspaper. "It was a good ice breaker. He was pretty uncomfortable, which is understandable, but he got right to his apology. He said that he was a kid who made a mistake. He actually referred to himself as a dumb kid that messed up, and he said he was trying to be funny and wasn’t and that he made a mistake and he was sorry, very sorry for hurting me and others."

The boy's mother said he wasn't raised to be racist and blamed "peer influence."

Leanna said she doesn't believe the teen was racist, and she was told the student and his friends have used the racial slur as a term of endearment -- which she doesn't understand but attributes to the "Trump effect" seen during the presidential campaign and after the election.

"It has become acceptable, for some reason, to be racist or make racist comments, and I don’t really know why that is," Leanna said. "The leaders of the nation are making these mistakes, and it’s seeming okay. It's not that surprising that these kids would make the same mistakes. That generation, that age group, they need a lot of help, a lot of guidance. They’ve grown up with phones and technology at their fingertips, and I don't think they have the mental and physiological capacity to fully understand the precautions they should take with the internet and with the future."