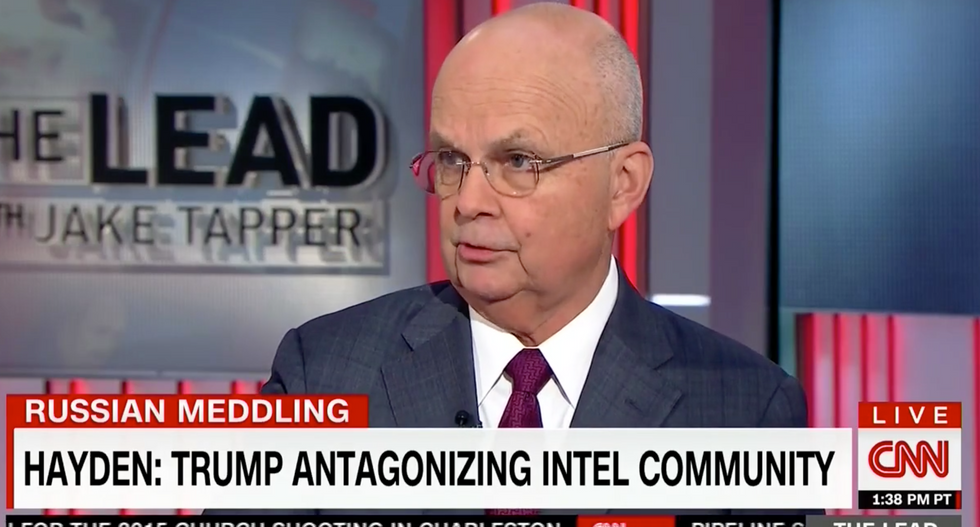 “The president-elect seems to have far more confidence in his intuition in his a-priori judgment and assumptions, and he doesn’t allow them to be affected by the fact-based analysis that the American intelligence community frankly is designed to provide him,” Hayden said on The Lead with Jake Tapper, iterating a sentiment he shared in a blistering Dec. 12 Washington Post op-ed.

Trump “is the only prominent American” he's aware of who “has not yet conceded that the Russians conducted massive covert influence campaign against the United States,” arguing that conclusion is “accepted throughout the intelligence community”

Hayden said he’s yet to conclude Russia’s intention in influencing the election, suggesting the Kremlin's simply “messing with our heads.”

“I think the’ve been quite happy to sow the kind of confusion we’ve seen,” Hayden said.

“Look at what we’re doing now,” he continued. “We have the president-elect of the United States publicly condemning the intelligence services on which he will have to rely as president.”

Tapper asked Hayden if Trump is “essentially … siding with the enemy.”

Hayden told Tapper the release of information regarding Russia’s involvement is “not CIA being political or being politicized,” adding the intelligence community is feeling “disappointment, and frankly disappointment trending towards anger, to be so casually dismissed” by the president-elect.

Asked whether Trump’s public disavowed of U.S. intelligence agencies plays into Russia’s narrative that the United States is also a corrupt and chaotic entity, Hayden conceded Trump “did create quite a dystopian view of America, the American economy, American borders and American political processes.”

Adding “we’ll see” if the president-elect “[tacks] back towards the center,” Hayden argued Trump’s response plays into the “horribly false” equivalency between Russia and the United States.