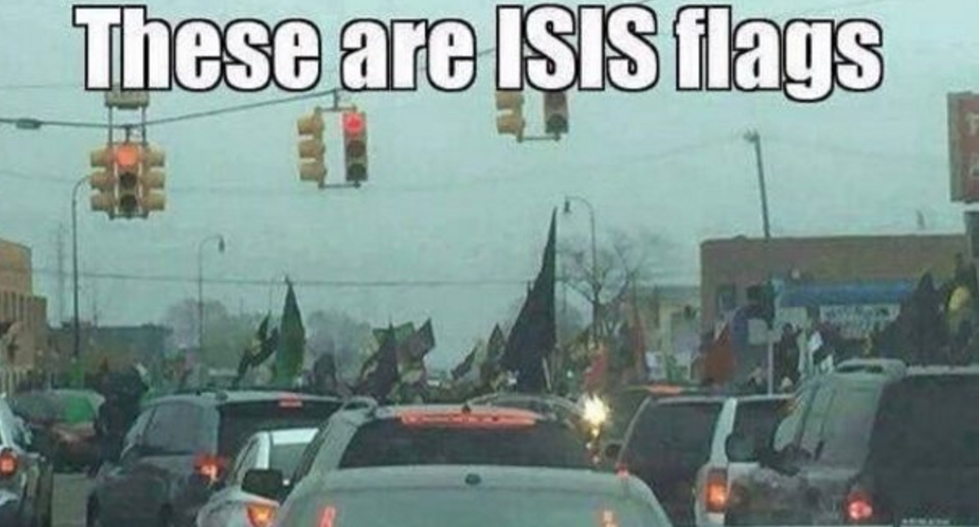 MCM’s Steve Neavling traced the meme to a Twitter user named “LATINA FOR TRUMP,” whose pinned tweet features a video of the anti-Muslim Christian apologist David Wood describing the time he was incarcerated and Dearborn police told him the city suffers from rampant honor killings, a claim the department emphatically denied.

A meme circulating also purports to show ISIS flags in Dearborn and asks people if they’re “paying attention.” One user commenting on the graphic replied “[Muslims] must b exterminated soon.” Another insisted Dearborn “has become Sharia Law!”

Snopes.com debunked the ISIS photo last year, noting the photograph was in fact an anti-ISIS demonstration; hundreds of Arab American gathered in Dearborn in Dec. 2015 as part of a “peaceful protest against hate.”

The website similarly debunked the suggestion that Dearborn was “the first U.S. city to implement Sharia law” back in 2013, tracing the article back to a website called the National Report which bills its articles as “fiction, and presumably fake news.”

@VickieLParks @Hahleeman1 @NeilTurner_new @pigpen1450 @seanhannity Lies like honor killings are rampant here and covered up by the police.
— I am Dearborn (@I am Dearborn) 1482295218.0