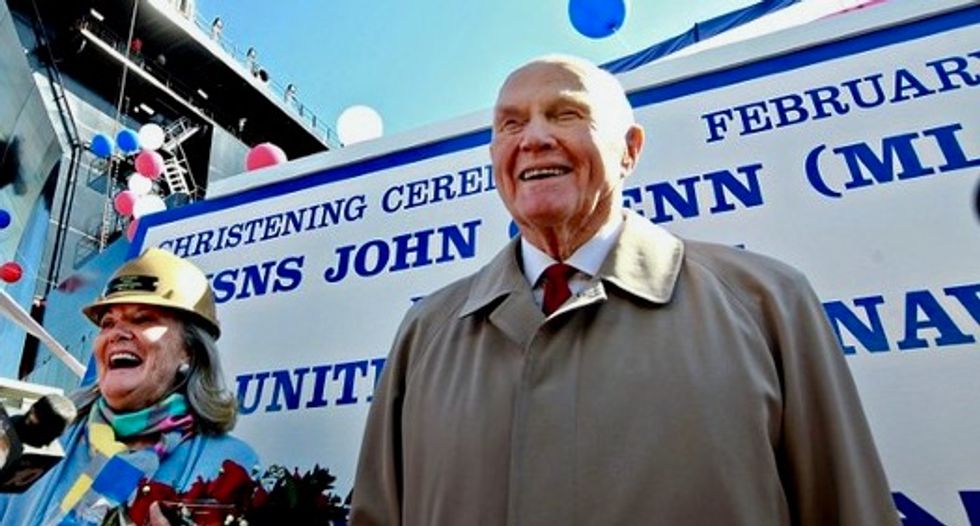 John Glenn, who became one of the 20th century's greatest explorers as the first American to orbit Earth and later as the world's oldest astronaut, in addition to a long career as a U.S. senator, died on Thursday at age of 95.

Glenn was credited with reviving U.S. pride after the Soviet Union's early domination of manned space exploration. His three laps around the world in the Friendship 7 capsule on Feb. 20, 1962, forged a powerful link between the former fighter pilot and the Kennedy-era quest to explore outer space as a "New Frontier."

President Barack Obama said that "with John's passing, our nation has lost an icon."

"When John Glenn blasted off from Cape Canaveral atop an Atlas rocket in 1962, he lifted the hopes of a nation," Obama said in a statement. "And when his Friendship 7 spacecraft splashed down a few hours later, the first American to orbit the Earth reminded us that with courage and a spirit of discovery there's no limit to the heights we can reach together."

President-elect Donald Trump said in a tweet that the nation had lost "a great pioneer of air and space in John Glenn. He was a hero and inspired generations of future explorers."

As the third of seven astronauts in NASA's solo-flight Mercury program to venture into space, Glenn became more of a media fixture than any of the others and was known for his composure and willingness to promote the program.

Glenn's astronaut career, as well as his record as a fighter pilot in World War Two and the Korean War, helped propel him to the U.S. Senate in 1974, where he represented his home state of Ohio for 24 years as a moderate Democrat.

But his star was dimmed somewhat by a Senate investigation of several senators on whether special favors were done for a major campaign contributor. He was cleared of wrongdoing.

Glenn's entry into history came in early 1961 when fellow astronaut Scott Carpenter bade him "Godspeed, John Glenn" just before the Ohio native was rocketed into space for a record-breaking trip that would last just under five hours.

"Zero-G (gravity) and I feel fine," was Glenn's succinct assessment of weightlessness several minutes into his mission. "... Oh, and that view is tremendous."

After splashdown and recovery in the Atlantic, Glenn was treated as a hero, addressing a joint session of Congress and being feted in a New York ticker-tape parade.

The U.S space agency said on Twitter, "We are saddened by the loss of Sen. John Glenn, the first American to orbit Earth. A true American hero. Godspeed, John Glenn. Ad Astra." Ad Astra is Latin for "To the stars."

U.S. Senator Bill Nelson of Florida, who orbited Earth aboard space shuttle Columbia in 1986, said, "On top of paving the way for the rest of us, he was also a first-class gentleman and an unabashed patriot."

Glenn's experiences as a pioneer astronaut were chronicled in the book and movie "The Right Stuff," along with the other Mercury pilots. The book's author, Tom Wolfe, called Glenn "the last true national hero America has ever had."

"I don’t think of myself that way," Glenn told the New York Times in 2012 to mark the 50th anniversary of his flight. "I get up each day and have the same problems others have at my age. As far as trying to analyze all the attention I received, I will leave that to others."

Glenn's historic flight made him a favorite of President John Kennedy and his brother Robert, who encouraged him to launch a political career that finally took off after a period as a businessman made him a millionaire.

Even before his Mercury flight, Glenn qualified for hero status, earning six Distinguished Flying Crosses and flying more than 150 missions in World War Two and the Korean War.

After Korea, Glenn became a test pilot, setting a transcontinental speed record from Los Angeles to New York in 1957.

The determination and single-mindedness that marked Glenn's military and space career did not save him from misjudgments and defeat in politics. He lost his first bid for the Senate from Ohio in 1970, after abandoning a race in 1964 because of a head injury suffered in a fall.

He was elected in 1974 and was briefly considered as a running mate for Democratic presidential candidate Jimmy Carter in 1980. But a ponderous address at the Democratic National Convention - people walked out - caused Carter to remark that Glenn was "the most boring man I ever met."

Glenn sought the Democratic presidential nomination himself in 1984 but was quickly eliminated by eventual nominee Walter Mondale, Carter's vice president. His failure was all the more stinging because he had been touted as an early front-runner.

In the Senate, Glenn was respected as a thoughtful moderate with expertise in defense and foreign policy. But his career's luster was dulled by a Senate investigation of the "Keating Five" - five senators suspected of doing favors for campaign contributor Charles Keating Jr. The panel eventually found Glenn did nothing improper or illegal.

He took a leading role in seeking to prevent the spread of nuclear weapons, especially to Pakistan. He was the author of a law that forced the United States to impose sanctions on India and Pakistan in 1998 after both countries conducted nuclear tests.

He also was a staunch advocate of a strong military and took a keen interest in strategic issues. He retired from the Senate in 1999.

Thirty-six years after his maiden space voyage, Glenn became America's first geriatric astronaut on Oct. 29, 1998. He was 77 years old when he blasted off as a mission specialist aboard the shuttle Discovery. He saw it as a blow to stereotyping of the elderly.

"Maybe prior to this flight, we were looked at as old geezers who ought to get out of the way," Glenn said after his nine-day shuttle mission. "Just because you're up in years some doesn't mean you don't have hopes and dreams and aspirations just as much as younger people do."

In his latter years he was an adjunct professor at the John Glenn College of Public Affairs.

He had a knee replacement operation in 2011 and underwent heart surgery in 2014.

Glenn is survived by his wife of 73 years, his childhood sweetheart, Annie Castor. They had two children, David and Lyn.

(Reporting by Will Dunham in Washington; Additional reporting by Irene Klotz; Editing by Bill Trott)