Franklin Graham: Pray for Trump to succeed because there's no 'pride' in computer programming 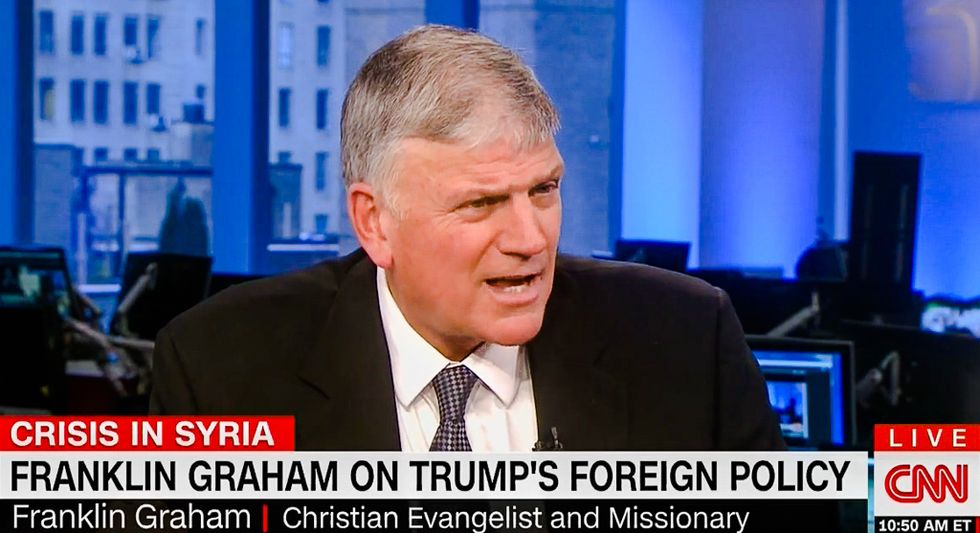 Rev. Franklin Graham told CNN's Carol Costello that he backs President-elect Donald Trump's plan to bring back manufacturing jobs because people are not proud of modern jobs in computer science.

During an interview on Tuesday, Graham praised Trump for finding a way to "work with the thugs" like Russian President Vladimir Putin "so that we can have peace in this world."

"That's the problem with the politicians in Washington," he said. "They sit down there and they do nothing. Now we've got a man who's coming into the White House who wants to get things done. And I hope and I pray -- we all as Americans, we need to pray for the president-elect and vice president-elect."

"Start working to make America great again, that's what Trump wants to do," the pastor continued. "We need jobs, we need to get employment up, we need to have hope for the future. And the only way you're going to have hope for the future is if a kid goes to college and comes out and knows, 'I can get a job and I can get a good paying job and maybe I can work my way up the ladder.'"

According to Graham, graduates are not finding jobs because companies have shifted to overseas manufacturing.

"This is terrible. I live in North Carolina where so much of our manufacturing base has gone to other countries," he insisted. "And people are out of jobs, are out of work. And they say, 'But we'll retrain you, we'll let you be a computer programmer.'"

"They don't want to be a computer programmer!" Graham continued. "They want to do the same job as their fathers and their grandfathers. There was pride in the manufacturing and the building. And we've taken all that away and it's sad."

"You've opened a can of worms," the CNN host replied.