From John Humphrey Noyes to Donald Trump: How America perversely twisted Jesus into a businessman 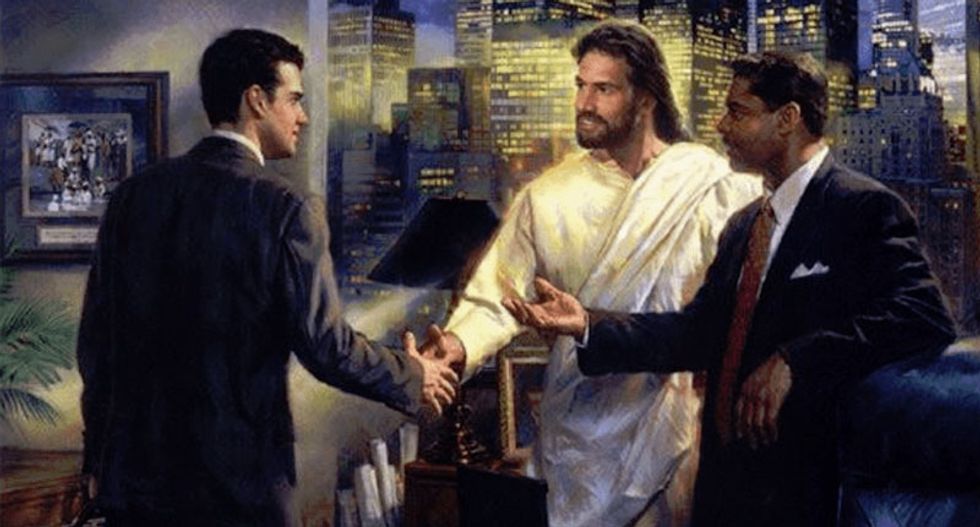 But the Protestant Reformation changed this way of thinking. According to German sociologist Max Weber, the Protestant virtues of thrift, delayed gratification and professional diligence in the pursuit of wealth gave birth to modern capitalism.

Business success became a sign of God’s favor, and nowhere more than in America did this ethos achieve such florid expression. During the 19th century, an American prosperity gospel – the conviction that God wanted Americans to live in material abundance – began to take shape. Meanwhile, the country witnessed an explosion of Christian sects and offshoots, from Methodists to Mormons.

Many of these inventive new creeds integrated popular folk superstitions and “quasi pagan money faiths.” Joseph Smith, before becoming the father of Mormonism, billed himself as a gold-hunting divine. He claimed he possessed a magical seeing stone that could direct him to lost objects or hidden treasure.

And while Joseph Smith was digging up gold, my great-great-great-uncle John Humphrey Noyes was contemplating God’s plans for the New World.

In 1848, Noyes, a defrocked Yale-educated minister, founded the Oneida Community in the wilderness of New York. My recent book “Oneida: From Free Love Utopia to the Well-Set Table,” shows how the Oneida Community embodied America’s unique cultural impulse to connect business success with aspirational Christianity. In the case of Oneida, what began as a Christian agrarian commune ended up as an industrial powerhouse.

But the Oneida Community was only one link in the prosperity gospel’s chain. In the post-war years, American business leaders seized on an ideology of divine self-interest. And the recent election of Donald Trump can be thought of as a perverse twist in America’s conflation of business success with piety.

Nearly a century before advertising guru Bruce Barton famously described Jesus as a cracker-jack salesman, the Oneidans had already spotted the parallel.

“It may be said of Christ, that he is the greatest business character in the universe,” Noyes once said. “All the major characters of the Bible history,” he continued, have the “spirit of enterprise and active business habits that belong to the merchant and the engineer.”

Members of the Oneida Community originally dreamed of living on the proceeds of their fruit orchards. But after their crops failed season after season, Noyes realized they needed a steadier source of income. He first undertook the successful launching of an animal trap factory, later supplemented with silk thread and silverware production. This would serve as the community’s industrial base, the engine that would allow them to advance their Christian communitarian ideals.

The 300 members of the community “family” lived, worked and prayed together under one roof, a homely structure they built themselves in 1849. They also connected the sharing of property to the sharing of sexual partners (Noyes is credited with coining the term “free love”) in a bid to recreate, on Earth, the unity enjoyed by the saints in heaven.

By 1862, as their factories expanded and their coffers filled, they constructed a brand new dwelling, christened “The Mansion House.” It included luxuries like indoor plumbing, central heating and a frescoed theater.

The Oneida Community believed in a tangible paradise, an imminent kingdom of God on Earth where peace and plenty would reign. They didn’t see the industrial and market revolutions in antebellum America in conflict with divine providence.

“The expansion of business, in the right spirit, is to us a token of God’s advancing conquest of the world,” commented one community member of Oneida’s fledgling industries in 1854. The difference was that the “power driving the machinery” in the community was not self-love or love of profit, but love of Christ.

The Oneida Community dissolved in 1880 amid internal squabbles and outside pressure to give up their immoral sexual arrangements. The community’s businesses were transferred into a joint stock company that teetered on the edge of bankruptcy.

Then an unlikely savior stepped in: Noyes’ decidedly secular, business-savvy son Pierrepont Burt Noyes. Under the younger Noyes’ tutelage, the family’s silverware business rocketed to success in the early decades of the new century, displacing industry leaders through a combination of canny niche marketing and advertising.

Nonetheless, in reflecting back on his life, the younger Noyes described the similarities between preachers and salesmen:

“[N]ature never intended me for a businessman. It intended me for a preacher. I have always enjoyed selling ideas more than selling spoons, but in my youth I had to learn to sell spoons in order to sell my ideas.”

But Oneida Community, Ltd. – led by the younger Noyes – wasn’t run by a bunch of money-mad capitalists.

On the contrary, they adhered to the Progressive Era’s “Social Gospel.” Developed by liberal Protestants, the Social Gospel emphasized Jesus’ role as a social justice advocate, while arguing that God’s material blessings should be fairly divided.

In the aftermath of World War II, some business leaders embraced a Social Gospel interpretation of wealth production and distribution as a way to diffuse the looming Communist menace. Noyes was among them.

In a 1949 speech delivered to Oneida’s salesmen, Noyes suggested that America needed a powerful weapon to combat communism. Only “a sweeping conversion of American leadership – industrial, financial, political – to a practical belief in liberal sharing with the country’s workers” could “save the capitalistic system and perhaps our democracy.” The New Deal had forever turned the country’s industrial and business ideals to the left, “and no one can ever turn it back.”

On this point, Noyes was gravely mistaken. As Princeton historian Kevin Kruse explains in his recent book “One Nation Under God: How Corporate America Invented Christian America,” free market advocates and industrialists during the postwar years were intent on reclaiming Christianity from the New Deal’s “socialist” overtones.

At the 1940 annual meeting of the National Association of Manufacturers at the Waldorf Astoria Hotel in New York, 5,000 industrialists thrilled to a rousing speech by Congregationalist minister James W. Fifield, who assured them that the time for worshiping the “false idol” of the welfare state had come to an end.

No longer would Jesus be an icon for some sentimental message of Christian “sharing.” Instead, he would be mobilized as a fierce defender of individual responsibility and freedom from a meddling government.

Soon, as Kruse’s history shows, a powerful coalition of ministers, corporate leaders and politicians under Dwight D. Eisenhower’s presidency nibbled away at the wall separating church and state. From the establishment of National Prayer Breakfasts and an inaugural “blessing” to Congress’ amendment of the Pledge of Allegiance to include the phrase “One Nation Under God,” Christian libertarianism insinuated itself into the highest levels of government.

In the paranoid atmosphere of the Cold War, the mantra that American prosperity hinged on a nation united by faith gained ground. The trinity of government, business and Christianity was complete.

“Goodness and Christian ideals run proportionately high among businessmen,” Reverend Fifield claimed. “They need no defense … for they have given America within the last decade a new world – high in general economic well-being.” The government had only to step back and let the invisible hand of God and Christian business leaders do their work.

The recent election of Donald Trump would appear to mark the apotheosis of this trend. Trump arguably owes part of his appeal to his resemblance to televangelists. The slick sheen of televangelist Joel Osteen comes to mind.

Trump’s can-do optimism and belief in prosperity make him the obvious heir to earlier self-help Christian sages of the Norman Vincent Peale variety. Like an avatar of the 19th-century treasure-seeker with his mystical seeing-stone, Trump mesmerizes audiences with his claim that everything he touches turns to gold. He promises salvation through business savvy and survival-of-the-fittest battles to the death, winners and losers winnowed out like the proverbial wheat from the chaff.

The proper relationship between wealth and faith is a question Americans have always wrestled with. Today, looking back at the arc of this history, the contrast is stark: from the communal origins of Oneida, to a solitary savior wreathed in an incandescent, back-lit halo of orange.

“I alone can fix it,” bellowed Donald Trump at the 2016 Republican National Convention.

On Thursday, WFLX reported that gasoline panic-buyers in Florida have stripped fuel from over a third of gas stations in the Miami metro area.

This is in spite of the fact, according to oil analyst Patrick De Haan, the Miami area is not even serviced by the Colonial Pipeline in the first place.

The host of "The Daily Show" broke down the hard-right shift by Rep. Elise Stefanik (R-NY).

"For a while, Stefanik was pretty much what used to be called a normal Republican," Trevor Noah said. "And then in late 2019, she saw an opportunity to make like Billie Eilish and give herself an eye-catching new image."