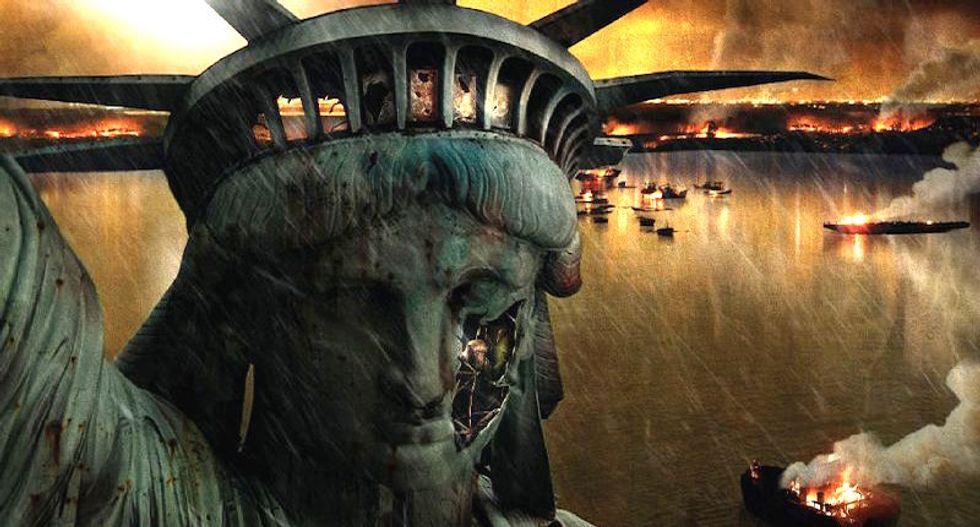 Concept art for 'Rise of the Planet of the Apes'

A sociologist who predicted the collapse of the Soviet Union and 9/11 attacks warns that American global power will collapse under Donald Trump.

Johan Galtung, a Norwegian professor at the University of Hawaii and Transcend Peace University, first predicted in 2000 that the "U.S. empire" would wither away within 25 years, but he moved up that forecast by five years with the election of President George W. Bush, reported Motherboard.

Now, nearly 17 years later, Galtung predicts that decline could come even quicker under a Trump administration.

Galtung's biographer credits the sociologist and mathematician with correctly predicting the 1978 Iranian revolution; China's Tiananmen Square uprising in 1989; the collapse of the Soviet empire in 1989; the economic crises of 1987, 2008 and 2011; and the 9/11 attacks.

His predictions are based on a model comparing the rise and fall of 10 historical empires, and decades ago Galtung developed a theory of decline based on “synchronizing and mutually reinforcing contradictions.”

For example, Galtung's model identified five key structural contradictions in Soviet society that he predicted would lead to its fragmentation unless the U.S.S.R. completely transformed itself.

Galtung predicted the tensions between the repressed Soviet working class and the wealthier "bourgeoisie" with nothing to buy would lead to economic stagnation, and those economic forces combined with the push for more freedom of expression, autonomy and freedom of movement would -- eventually did -- pull down the Soviet Union.

He predicted in his 2009 book, "The Fall of the American Empire -- and then What?" that the U.S. was plagued by 15 internal contradictions that would end its global power by 2020, and Galtung warned that phase of the decline would usher in a period of reactionary fascism.

American fascism would spring from its capacity for global violence, a vision of exceptionalism, a belief in an inevitable and final war between good and evil, the cult of a strong state leading that battle, and a cult of the "strong leader."

Galtung said all of those elements presented themselves during the Bush era, but he fears fascist tendencies could sharpen under Trump as those cultists lash out in disbelief at the loss of American power.

The sociologist identified unsustainable economic, social, military and political contradictions that would eventually topple the U.S. as a world power.

Overproduction relative to demand, unemployment and the increasing costs of climate change would weaken the U.S. economy, according to his model.

Galtung also predicted that rising tensions between the U.S., NATO and its military allies, coupled with the increasing economic costs of war and the political conflicts between the U.S., United Nations and the European Union, would also diminish American power.

“The collapse has two faces,” Galtung said. “Other countries refuse to be ‘good allies: and the USA has to do the killing themselves, by bombing from high altitudes, drones steered by computer from an office, Special Forces killing all over the place. Both are happening today, except for Northern Europe, which supports these wars, for now. That will probably not continue beyond 2020, so I stand by that deadline.”

Rising tensions between America's Judeo-Christian majority and Islam and other religious minorities created cultural contradictions, which are further sharpened by social contradictions between the so-called American dream and the reality that fewer Americans can achieve prosperity through hard work.

The decline of the U.S. as a global power would probably rip apart its domestic cohesion, Galtung said, which could potentially reshape American borders.

“As a trans-border structure the collapse I am thinking of is global, not domestic," Galtung said. "But it may have domestic repercussion, like white supremacists or even minorities like Hawaiians, Inuits, indigenous Americans and black Americans doing the same, maybe arguing for the United States as community, confederation rather than a ‘union.'"

That breakup could potentially bring a revitalization of the American republic, Galtung said -- if Trump makes a surprising shift in his persona and policies.

“If he manages to apologize deeply to all the groups he has insulted and turn foreign policy from U.S. interventions -- soon 250 after Jefferson in Libya 1801 -- and not use wars (killing more than 20 million in 37 countries after 1945): A major revitalization!" Galtung said. "Certainly making ‘America Great Again.' We’ll see."