'He's auditioning to be a dictator’: CNN panel erupts over Trump’s targeting of individual Americans 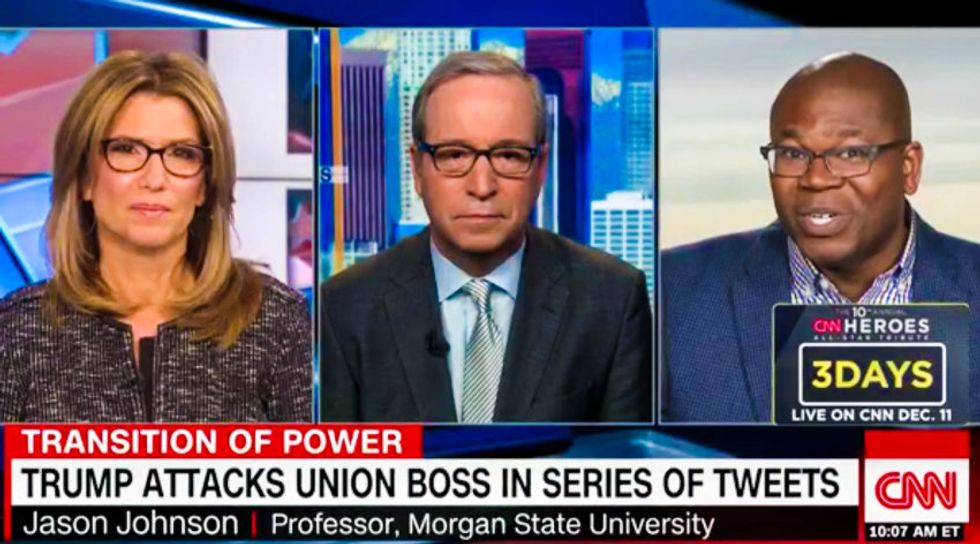 Jason Johnson tells CNN's Carol Costello that Trump is 'auditioning to be a dictator' (Screen cap).

Part of being president is taking criticism from all sides about everything you do -- but President-elect Donald Trump can't seem to let any slight go, whether it comes from Barack Obama or Alec Baldwin.

Trump is drawing harsh criticism for his decision on Wednesday night to personally attack Chuck Jones, the president of United Steelworkers 1999, after the union boss pointed out that Trump didn't tell the truth about the number of jobs he had help save at the Carrier plant in Indiana. Shortly after Trump's attack on Twitter, Jones began receiving death threats that targeted his children.

Appearing as a panelist on Carol Costello's CNN show Thursday, political science professor Jason Johnson pointed out that targeting individual citizens for harassment is something that dictators regularly do to assert power.

"He's basically auditioning to be a dictator," Johnson said of Trump's behavior. "Dictators bully people, dictators use that kind of arbitrary power... and I think it should concern any American, whether they're a Republican or Democrat."

Fellow panelist Ron Browenstein didn't go that far, although he did acknowledge that Trump's behavior both before and since the election have raised all kinds of red flags for people who are worried about the future of dissent in this country.

"I can see why people would feel this is kind of a road toward... rejecting the voice of pluralism, and legitimate voices of dissent," he said. "I would not go that far, but I do think people ought to be concerned about what the implications of this may be.

Specifically, he said that Trump should not appear as though he wants to scare people away from dissenting, especially when the country is so bitterly divided.

"Donald Trump won the election fair and square, and he won the Electoral College, but the fact is that he's going to lose the popular vote by more than anyone who has ever taken office before," he said. "Is his goal to persuade, and kind of include, those Americans [who didn't vote for him] or is it really to kind of intimidate them into being quiet?"