Human ancestor Lucy spent much of her time in trees: study 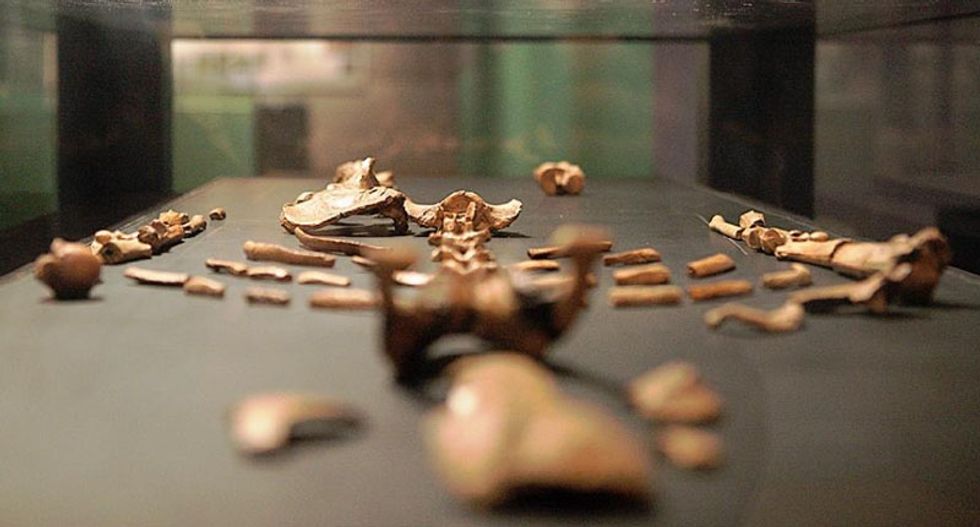 A representative model of the skeleton "Lucy" at the opening of the new permanent exhibition at the National Museum of Ethiopia on December 3, 2014 (AFP Photo/Zacharias Abubeker)

Lucy, the ancient ancestor of modern humans, probably spent at least a third of her day nesting in trees, according to new research unveiled Wednesday.

Our 3.18 million-year-old relative, whose fossilized partial skeleton was discovered in Ethiopia in 1974, likely got around as much like a modern chimpanzee as a modern human, according to a new study published in the journal PLOS ONE by scientists at Johns Hopkins University in Baltimore, Maryland and the University of Texas at Austin.

The beloved, 3-foot-6-inch (about one meter) bipedal Australopithecus afarensis has confounded paleontologists for years. They have been debating whether the 60-pound (27 kilogram) hominid spent most of her time on the ground, like modern humans, or in the trees, like chimpanzees.

The study finds that Lucy had strong upper arms, suggesting she regularly climbed trees. She also had relatively week legs that were not used for climbing and were inefficient for walking.

The combination of the two discoveries led researchers to conclude that Lucy probably nested in tree branches at night in order to avoid predators, used her arms to travel between trees and may have even foraged for food among branches.

The researchers arrived at their conclusions by conducting new high-definition scans of Lucy's bones -- combining 35,000 individual images taken with a powerful scanner capable of penetrating the layers of minerals in her fossilized remains.

They studied the internal structures of the upper bones of Lucy's two arms, and the femur bone of her left leg, discovering that her upper limbs were highly developed -— suggesting they sustained strong muscles similar to tree-climbing modern chimpanzees.

"It is a well-established fact that the skeleton responds to loads during life, adding bone to resist high forces and subtracting bone when forces are reduced," said John Kappelman, an anthropology professor at the University of Texas, and one of the main authors of the research.

Chimpanzee skeletons have more solidly built upper limbs, because they use their arms to climb, while humans have more developed lower limbs due to walking, according to Christophe Ruff, anatomy professor at The Johns Hopkins University and a co-author of the study.

"The results for Lucy are convincing," he said.

Another recent study concluded that Lucy probably died from a fall from a particularly tall tree. The study, published in the British magazine Nature, arrived at that conclusion after analyzing a bone fracture in Lucy's fossilized remains.

But scientists have had trouble determining exactly how much of Lucy's time was spent off the ground. The new study suggests that if she slept around eight hours a day, she would have spent at least a third of her time in and among branches.

Other comparisons in the study suggest that even when Lucy walked on her two legs, she did so less efficiently than modern humans, limiting her ability to move long distances by foot.

Long considered the longest living human relative, Lucy was dethroned of her status in 1994 following the discovery -— also in Ethiopia -— of Ardi, a female Ardipithecus ramidus who lived 4.5 million years ago.

She is the most ancient hominid fossil from the evolutionary branch that led to humans.