Intel analysts sound the alarm on Trump: 'Smart people are the ones who know what they don't know' 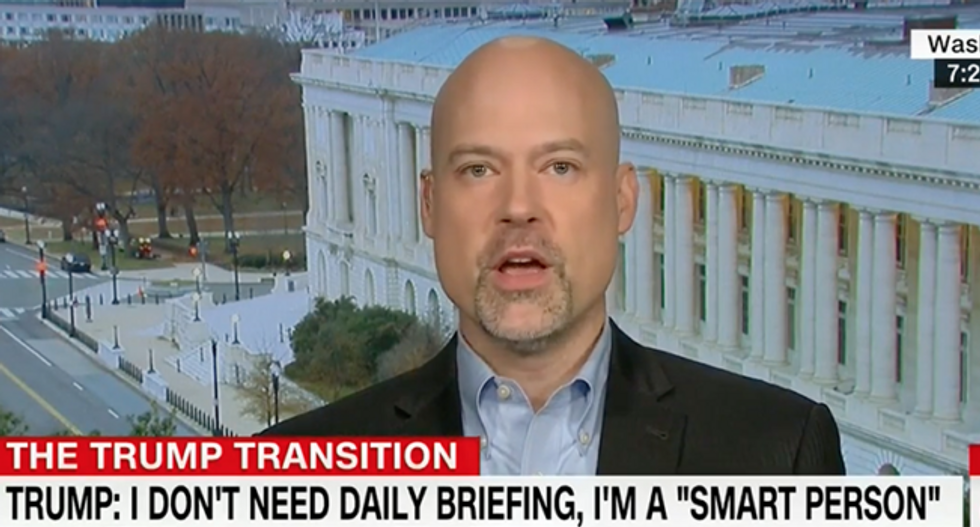 President-elect Donald Trump has made news over the last few weeks, becoming the only president-elect to reject daily briefings by the intelligence agencies on national security threats. Instead, Trump is recieving them about once a week. The result, according to CNN's intelligence sources, is that the incoming commander-in-chief is flying blind.

In a recent interview with Fox News, Donald Trump said that he doesn't need the daily briefing because, "I'm, like, a really smart person." Author David Priess served in both the Bill Clinton and George W. Bush administrations "as an award-winning intelligence officer, manager, and daily intelligence briefer at the CIA as well as a desk officer at the State Department," according to his website. He concludes that these briefings aren't about whether someone is smart or stupid, it's about being informed.

"The briefings can't be taken in isolation," Priess explained to CNN's Chris Cuomo. "It's a steady stream of intelligence information that's constantly updating stories around the world. So, a briefing now and then or reading the daily book of secrets now and then doesn't give the president-elect a full picture of what intelligence can do for him. It's a steady stream that updates him on situations with new and different information. Not about how smart he is. It's about getting the information he needs to make those decisions."

Counterterrorism analysist Philip Mudd explained that Trump's reluctance to pay attention to intelligence briefings is worrisome, not necessarily because of what has happened but what can happen.

"Look at the situations the president-elect is going to have to deal with in coming months and years," Mudd said. "Intelligence about whether Iran is complying with the nuclear agreement, that president-elect has been so critical of, determining Russian complicity in attacks on civilians in Syria. That's an issue that would be briefed this morning, I would say, if the president-elect were taking a briefing. There's an offensive in Aleppo. What are the Russians doing?"

Mudd argued that Washington, D.C. is a city where "information is power," and he's concerned because "we do not have access to the individual who makes decisions for the executive branch. This is huge, especially after 15 years of president Obama and formerly President Bush, who gave great access to the CIA."

He continued, explaining that such a briefing isn't just about intelligence, both information and the smarts to interpret it.

Mudd recalled 9/11 and the threat information that an informant penetrated Al Queda and said that they were intent on attacking the United States. The CIA director called Mudd and said that they needed to brief President Bush on it the next day. "It's a discussion about national security, not just an intelligence briefing," he said.

Priess agreed with the importance, saying that he thinks it's a mistake in not taking these briefings daily and claim that he's so smart he doesn't need them.

"The two remarks he made were both interesting: One is he's smart, so he doesn't need the daily briefings," Priess began. "I've worked with some of the smartest people I've ever met at CIA. No kidding, smart people, are the ones who know what they don't know. They know they need information to make better decisions. Donald Trump has had to make important decisions in his previous career. He knows the value of information."

Priess said that the briefings could have neglected to show the different pieces and might be repetitive and perhaps that's why Trump thinks he doesn't need them.

"If he sees a piece once a week and it's on Iraq, he may think that it's just the same old thing about Iraq," Priess said. "They need to highlight what's new and different to show him the value of that information. Eventually, perhaps when he's in office, he will come to the same position that all the former presidents and vice presidents that I spoke with for my book told me. They get the value of intelligence. They see that it helps inform them on these major decisions they have to make. And they wouldn't want to have made those decisions without the value of the intelligence analysis."

Mudd remarked that one of the largest concerns we saw during the election was the fake news Trump and his team were pushing out. This can't happen when it comes to intelligence. Trump and his staff can't be getting their intelligence from random blog sites.

It is unclear if Trump is misinterpreting the words "intelligence" and "smart," in this case. The daily intelligence briefing is not interchangeable with the "smart briefing" it's an "information briefing."

Check out the shocking conversation below: