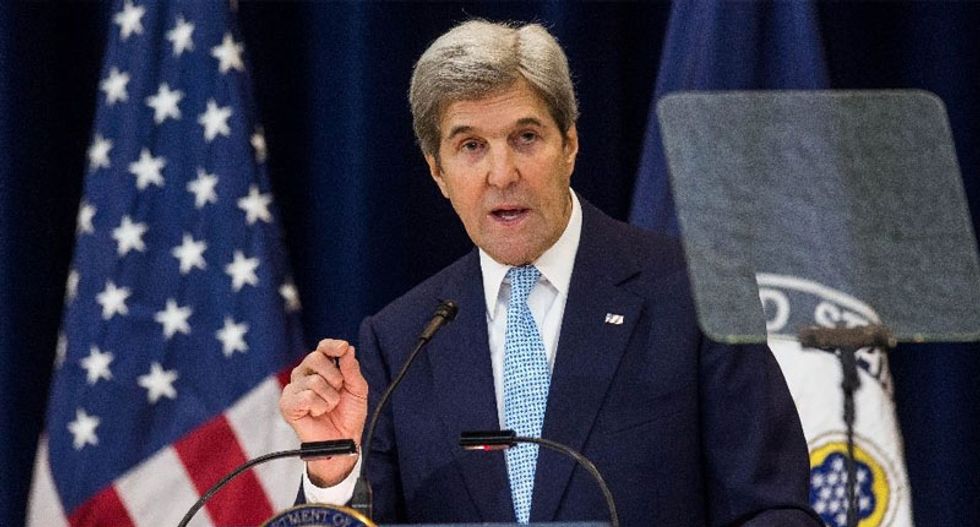 In a stern parting shot, US Secretary of State John Kerry warned Israel on Wednesday that building settlements on Palestinian land threatens the country's very future as a democracy.

With President-elect Donald Trump taking office on January 20, and already urging Israel to "stand strong" in the face of international pressure, it was not clear what impact Kerry hopes to have on the peace process.

But his comprehensive and at times angry speech laid down parameters for a peace deal -- two states within their pre-1967 frontiers and with a shared capital in Jerusalem -- that he hopes will outlast Obama.

Washington officials have refused to say what they might do next, but Israel fears the administration could attempt to codify these principles in a UN resolution or statement by the Middle East diplomatic quartet.

Either way, they will certainly reject Kerry's rebuke.

Netanyahu immediately denounced the speech as "skewed against Israel" and, according to an Israeli NGO, Jerusalem authorities authorized a new four-story block of settler homes just ahead of it.

He was also due to make a statement at his office in response to Kerry.

- Between the river and the sea -

Kerry's speech did not depart from US policy of many years, nor from his warnings in recent months, but critical and supportive observers alike noted his detailed breakdown of the problem as he sees it.

"Today, there are a similar number of Jews and Palestinians living between the Jordan River and the Mediterranean Sea," he told an audience of diplomats.

"They have a choice. They can choose to live together in one state, or they can separate into two states.

"But here is a fundamental reality: if the choice is one state, Israel can either be Jewish or democratic -– it cannot be both -– and it won't ever really be at peace," he argued.

Kerry was speaking against the backdrop of a diplomatic firestorm that was triggered last week when, on Obama's instruction, US diplomats failed to veto a UN Security Council resolution criticizing Israel.

The resolution, backed unanimously by the rest of the 15 powers on the council, effectively declared Israel's settlements on areas of east Jerusalem and the West Bank beyond its 1967 border illegal.

Netanyahu, whose right-wing coalition is backed by the settler movement and who has insisted the home building is no threat to peace, was furious and accused Obama and Kerry of orchestrating the vote.

Trump, who has picked a future US ambassador to Israel who strongly supports settlement building, was also angered, Tweeting: "We cannot continue to let Israel be treated with such total disdain and disrespect."

But Kerry was undeterred, insisting the US could not "in good conscience" have vetoed a resolution it broadly agrees with, and piling on more criticism of Israel in his landmark speech.

"The vote in the UN was about preserving the two-state solution," he declared.

"That's what we were standing up for: Israel's future as a Jewish and democratic state, living side by side in peace and security with its neighbors," he said.

"The two-state solution is the only way to achieve a just and lasting peace between Israelis and Palestinians," Kerry said, warning that such a solution is now in "serious jeopardy."

"No one thinking seriously about peace can ignore the reality of the threat settlements pose to peace," he said.

"Trends indicate a comprehensive effort to take West Bank land for Israel and prevent any Palestinian development there."

And Kerry added: "The settler agenda is defining the future in Israel. And their stated purpose is clear: They believe in one state: greater Israel."

Already, last week's decision to allow the UN resolution to pass has angered Israel's many supporters in Washington, including both Democratic and Republican lawmakers and major Jewish American lobby groups.

The speech did nothing to appease their concern, and some observers questioned its "curious" timing.

"A speech of this gravity really should have been delivered before such a permanent move as the Security Council resolution, rather than after," scholar Jonathan Schanzer told AFP.

Schanzer, vice president of the Foundation for Defense of Democracies, argued that Israel should have been given time to respond to Kerry's complaints before being ambushed at the United Nations.

Ilan Goldenberg of the Center for a New American Security was more supportive of Kerry's goals in the speech, but he also noted: "It would have been better two years ago."

Kerry, he suggested, was attempting to lay down the framework for a peace process that might bear fruit before Trump arrives in office and radically changes the US position.

The 35-year-old Ukrainian has remained in his hometown of Kharkiv, Ukraine's second-biggest city, to paint its walls even amid the destruction of Russia's invasion.