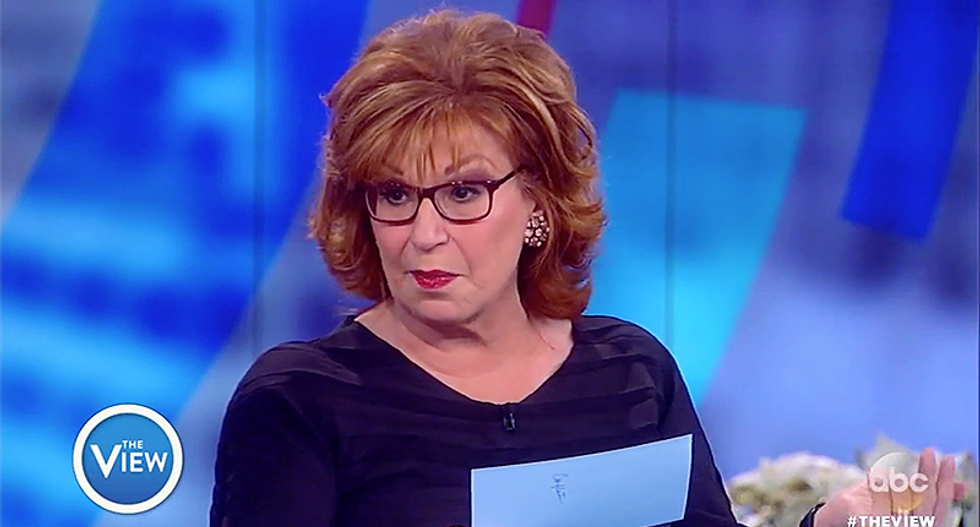 Members of the Electoral College are requesting a national security briefing to decide whether they should cast their electoral votes for President-elect Donald Trump or abstain. The group has begun calling themselves the Hamilton Electors, named after Alexander Hamilton and Federalist Papers: No. 68. This prompted "The View" co-host Joy Behar to have a "little meltdown" prior to the show, she confessed.

"I had a meltdown today and I'll tell you why," Behar began. "Because when we first started -- when he first was elected, I was angry and a lot of people were crying, and I said to them, don't get sad, get mad. So, I was in touch with my rage. Today, I read the New York Times, I read other things, and I realize that the Democrats are not going to do what they have to do to stop [Trump], that the Democrats are rolling over unless they're changing it right now."

Behar explained that this is the last chance that Americans have to stop Trump. "They're to vote, and according to the Constitution and Alexander Hamilton, these are the reasons they can vote against him," Behar read from her notes. "This is the constitution: Foreign involvement in the election, number one. Check. We all know that the Russians hacked into the whole thing. His business ties have already introduced unparalleled and Unconstitutional conflicts of interest. He's not giving up -- is he giving up his golf course in Scotland? I don't think so. Is he giving up his Trump hotel in Istanbul? I don't think so."

Co-host Whoopi Goldberg noted that the foreign conflicts of interest were number two in the list.

"And the third thing, of course, is is that Hamilton wanted to prevent voters from the influence of 'outside actors, bullies, demagogues and populism,' which got him in, as Hamilton put it, 'an unqualified candidate who won over the masses with his talents below intrigue and the little arts of popularity.' Read that, celebrity. Check."

Behar concluded that the criteria should preclude any Republican elector from casting their ballots for Trump if they follow the Constitution and "are the patriotic Americans that they claim they are."

Her fellow co-hosts disagreed that this was a viable option, even arguing that it was not in accordance with the law and that electors were tasked with approving what the voters in their states choose.

"I don't feel that when the system is set up the way that it should that the Electoral College is to represent who voted for -- the people spoke and those electorates are obligated to vote that voice," co-host Sara Haines said. "To me, the rules were decided before the game. That means everyone operated their campaigns and everything with the rules in mind. Because it didn't turn out the way you wanted, honestly the way I wanted, I don't think we should therefore then go back and rewrite it." Behar read rules of the election that date back to 1788.

"I hear what you're saying and I know you have genuine concerns and many people have genuine concerns about him," co-host Jedediah Bila said. With respect to his businesses, I don't like a lot of the potential involvement but there's nothing illegal going on there. There's nothing you can say he did something illegal. With respect to the Russians, we know that the Russians were involved, but they can't prove how they were involved. They can't prove that the Russians tipped the election for Donald Trump. There's no way for them to prove that."

Behar was quick to explain that those things were not what Hamilton wrote. "Hamilton didn't say anything about collusion," she said. "He just said foreign involvement."

While the other hosts said that there is no proof that the Russians were involved, most of the information surrounding this issue is classified by the CIA. That is a reason that many electors have said that they would like a briefing that outlines the information that is known to the government about the Russian hack and its impact on the election.

According to the website for the group HamiltonElectors.com, the group seeks to honor Hamilton's vision of the Electoral College that if a person is elected by the population that is unqualified or has a "desire in foreign powers to gain an improper ascendant in our councils," that an elector can cast his or her vote against that person.

"Electors have already come forward calling upon other electors from both red and blue states to unite behind a Responsible Republican candidate for the good of the nation," the site says.

Donald Trump threatened "political reprisal" to those considering whether or not to abstain or vote for a candidate other than Trump.

Hamilton wrote that the electors must ensure “that the office of President will never fall to the lot of any man who is not in an eminent degree endowed with the requisite qualifications.”

GOP elector Chris Suprun told CNN yesterday that he doesn't have the information necessary to draw the proper conclusions and that's why he and many other electors are seeking further information from a "fact-based intelligence agency."

Two Colorado electors that support Trump have sued their state claiming that they shouldn't have to vote the way that the Colorado popular vote did. Trump's campaign filed a suit attempting to block it in that case as well.

You can see the full exchange on "The View" below: