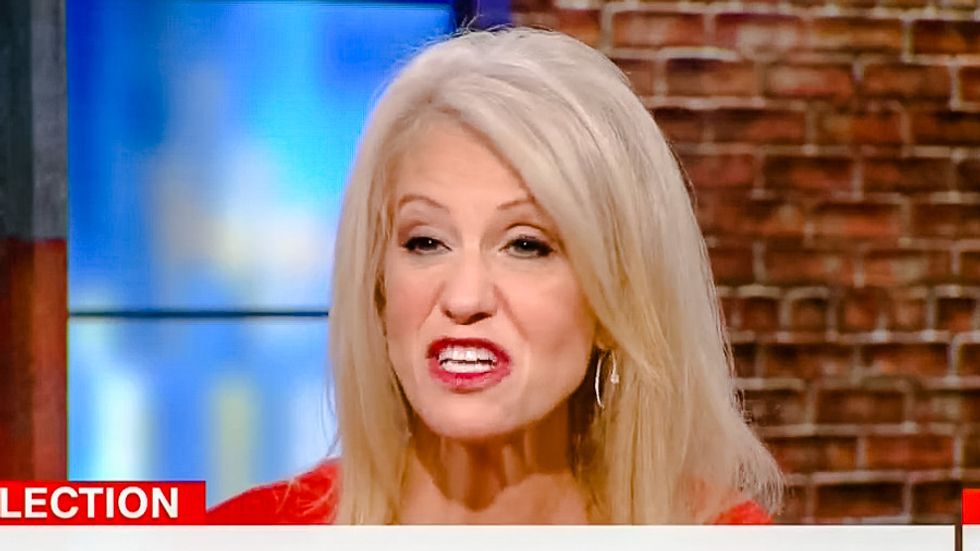 Thursday began a two-day conference digesting the election among the political elite, The Daily Beast reports. The goal was to have campaign managers and senior staffers from six campaigns come together to discuss what went on behind the scenes. But it quickly devolved into a heated argument between the two campaigns.

“I would rather lose than win the way you guys did!” said Palmieri, the communications director for Hillary for America to the Trump team

“How exactly did we win, Jenn? How exactly?” Trump campaign manager Kellyanne Conway snipped back. “I have a smile on my face at all times.”

“Are you gonna look me in the face and say I ran a campaign that was a platform for white supremacists?” Conway snapped.

Palmieri basically said she was.

“Are you kidding me?” Conway asked.

“You guys are punching down, this is unbelievable,” Trump’s deputy campaign manager David Bossie shouted.

Clinton spokeswoman Karen Finney agreed, saying, “part of what Donald Trump did in this campaign was to mainstream the alt-right.”

Conway told the Clinton staffers, “You guys are bitter. We are being very gracious. You’re bitter.”

Conway even slammed Clinton campaign chief strategist Joel Benenson, who also slammed the alt-right for their racism. “You’re not being nice."

“Hashtag-he’s-your-president, how about that?” Conway also slammed the Clinton crew, referencing the #NotMyPresident campaign on Twitter. “We won.”

One audience member called the panel "a goddamn foodfight."

“[Trump rallies] were like rock concerts,” former Trump manager turned CNN pundit Corey Lewandowski said. “It was something that the people were energized about. We had groupies! Holy shit!”

While Clinton campaign manager Robby Mook spoke, The Beast noted that Lewandowski would fiddle with his phone while others paid attention. When he continued, he bragged even more about the win and Mook glared at him.

“He looked like he wanted to strangle him,” one audience member noted.

Mook also noted over the course of the summit that "The Media" didn't cover Trump to the degree that it did Clinton. Thus, stories like Trump's business conflicts of interests, ties to the "Lolita Express," Trump University and other stories didn't garner the attention Clinton's emails did. He called it a "post-fact" election.

“[We] were punished for telling the truth, and being true to nuance,” Mook said. “And there are problems that the next president is going to have to address that are complex.”

One place Mook he also admitted fault was in voter outreach. “We weren’t measuring the white vote correctly,” he said.