Law professor: Trump's businesses make him a 'walking, talking violation of the Constitution' 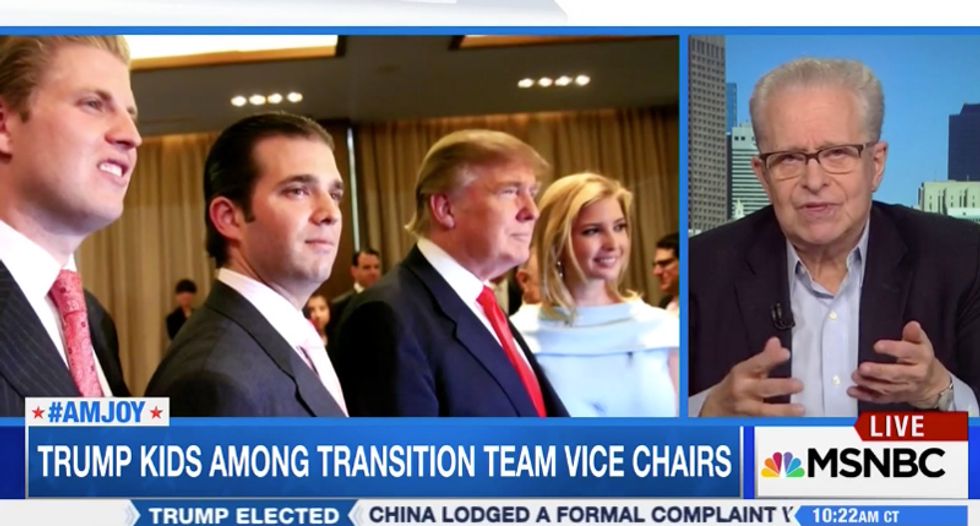 A constitutional law professor warned that the day Donald Trump takes the oath of office he will be breaking the law, calling the president-elect a "walking, talking violation of the Constitution," due to his business dealings.

Appearing on MSNBC's Am Joy with host Joy Reid, Harvard law professor Laurence Tribe detailed the many ways Trump and his family's continuing involvement with his business is expressly forbidden by the law, specifically citing the "emoluments clause" in the Constitution.

"It's called the emoluments clause and it basically says no officer of the United States can be on the receiving end of any kind of benefit, economic benefit, payment, gift, profit, whatever, from a foreign government or its corporations or agents," Tribe explained before pointing to Trump's kids having one foot in his administration and the other in Trump's businesses. "In this case Donald Jr. or Ivanka or Eric -- then there would be a close relationship that could never be disentangled by the American public."

Turning to the Trump family's continuing ownership of hotels and businesses throughout the world, Tribe said Trump needs to sell off everything.

"He's a constant emolument magnet," Tribe quipped. "He thinks of himself as a babe magnet, but he's an emoluments magnet. And all around the world everybody wants to go to his hotels and not the competitors, and wants to give him a variance or a special land use permit and there's simply no way short of absolutely liquidating all of his cash and assets into a blind trust and not handed over to his kids."

"No way short of that prevents him from being a walking, talking violation of the Constitution from the moment he takes the oath," he concluded.