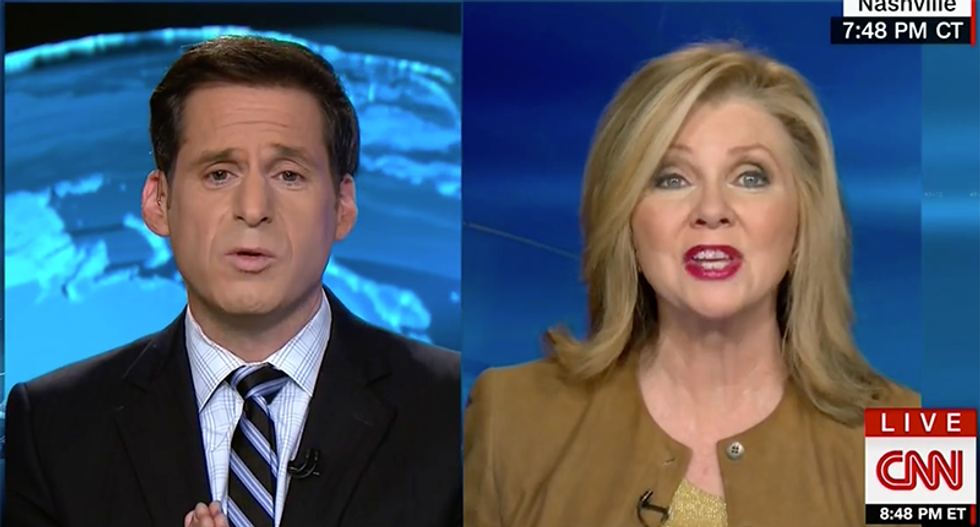 Rep. Marsha Blackburn (R-TN) drew criticism Wednesday night when she tried to justify a ban on Syrian refugees by saying that they aren't vetted when they come into the United States. CNN host Brianna Keilar fact-checked the Congresswoman but Thursday night, host John Berman got another crack at her.

"We reached out to the State Department about that," Berman said of Blackburn's claims. "They said: '100 percent of refugees admitted to the United States are vetted through a highly rigorous process that involves multiple federal agencies, security and law enforcement. While they can't guarantee a 100 percent success rate, the vast majority have proven to be peaceful additions to our society.'"

"I think you can look at statements made by Jay Johnson. Statements that have come from DHS," Blackburn claimed, squirming in her seat. She cited a September memo from DHS about vetting.

"I just want to be clear about one thing," Berman began. “Vetting can be imperfect. But to say it is not happening is a completely different thing. Any refugee entering the United States has been vetted. Things can be missed. But that doesn't mean they are not being vetted."

Blackburn stammered, "We know -- that even -- go back to the interrogator for KSM. And he even talks about how KSM is talking about wanting to use the refugee program. You can look at Secretary Johnson's statements about we don't know a lot about the Syrian refugees coming into the country, those coming from war-torn areas. And that was a statement he made in 2015. And then to not pause this program until we can say, we have a process in place, where we are going to be able to know who is coming into this country. I think it is our responsibility to know who is coming into our country."

As if taking a page out of a Republican playbook, Blackburn then quoted Ronald Reagan.

See the shakedown below: