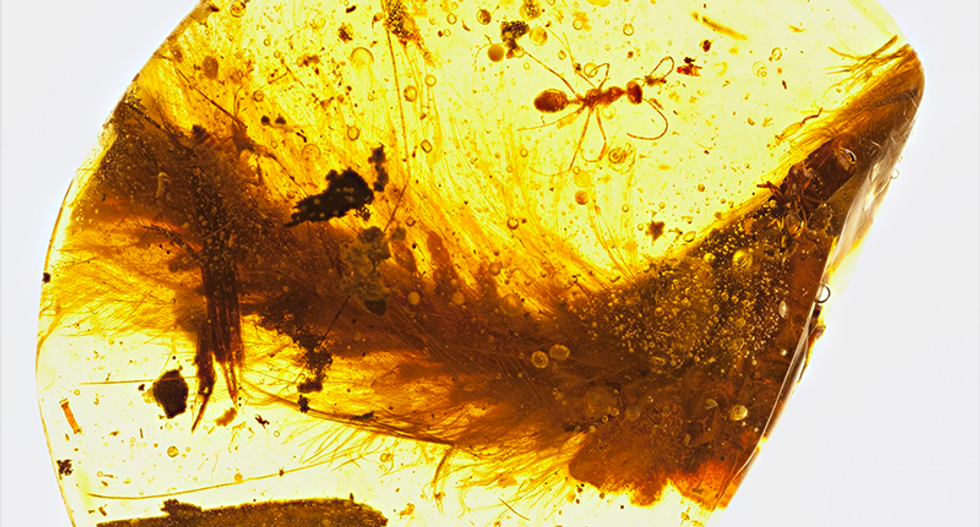 Feathered tail of a dinosaur that lived 99 million years ago captured in amber (Photo: the Royal Saskatchewan Museum)

A modest little dinosaur that scampered across northwestern China 160 million years ago boasted a unique trait not seen in any other dinosaur or other prehistoric creature yet unearthed: it was born with teeth but became toothless by adulthood.

Scientists on Thursday said fossils of 19 individuals of a dinosaur called Limusaurus, ranging in age from under a year to 10 years, showed that juveniles had small, sharp teeth but adults developed a toothless beak.

This cluster of dinosaurs, found in Xinjiang Province, apparently became hopelessly trapped in a mud pit and died.

Only rarely have scientists found fossils of a dinosaur species ranging from babies to adults, a sequence revealing various anatomical changes that unfold as an animal matures.

Limusaurus was a lightly built two-legged dinosaur with short arms and long, slender legs. It may have had down-like feathers covering at least part of its body. The largest ones were about 6 feet long (under 2 meters).

"It probably looked something like an emu with a long tail," said George Washington University paleontologist Joey Stiegler, one of the researchers in the study published in the journal Current Biology.

Such tooth loss is called ontogenetic edentulism. Some animals alive today have it, including the egg-laying Australian mammal the platypus.

The adult Limusaurus individuals also were found with stones called gastroliths that some plant-eating dinosaurs swallowed to grind up plant material in the stomach. The babies lacked these.

Limusaurus is a member of the theropod dinosaur group within which birds evolved.

George Washington University paleontologist James Clark said the findings suggest "species close to the origin of birds may have gone through a similar development, and tooth loss may have been gradual during the evolutionary origin of birds."

"This is important in showing that growth and development in dinosaurs was more complex than previously suspected, and it provides a model for a stage that birds may have gone through in evolving their beak," Clark added.

Birds, first appearing about 150 million years ago, evolved from small feathered dinosaurs. The earliest ones had teeth. Over tens of millions of years, many evolved toothless beaks like those in today's birds. The last birds with teeth died with the dinosaurs about 66 million years ago.