Merriam-Webster's dictionary names 'surreal' as 2016 'Word of the Year' 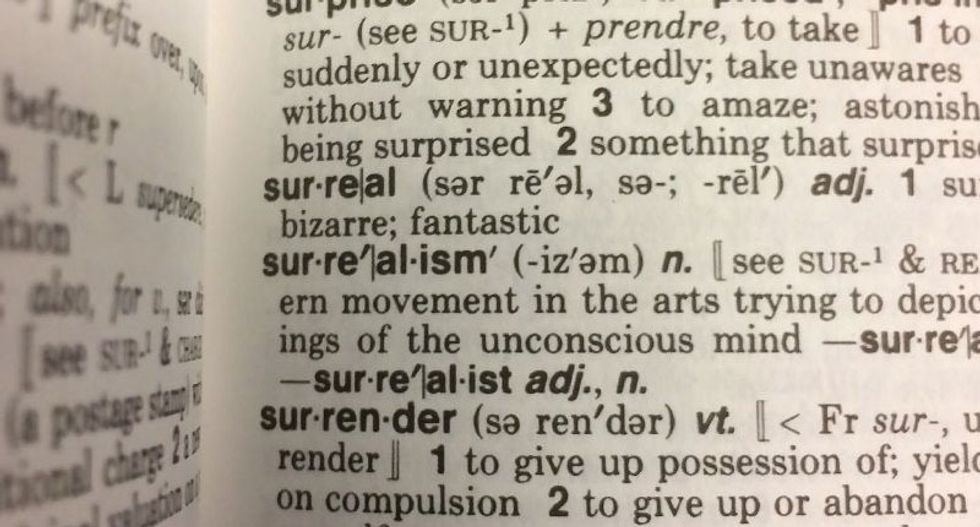 Donald Trump's upset win in the US presidential election astonished people so much that they rushed to the dictionary to look up the word everyone was using to describe the event: surreal.

Indeed, Merriam-Webster's dictionary on Monday named surreal its Word of the Year 2016, the honor given to the word or term with the sharpest spike in look-ups over the previous year.

Surreal, definition: "marked by the intense irrational reality of a dream."

It actually triggered not one but a series of sudden jumps in people looking it up.

The first came after terrorist bombings in Brussels in March. Thirty-two people died, as did three attackers.

It happened again in July after the coup attempt in Turkey and the terrorist attack in Nice, France in which a man driving a truck swerved back and forth through a crowd watching Bastille Day fireworks, crushing 86 people to death.

But the biggest spike came after Trump -- the tweeting, shoot-from-the-hip political neophyte and property tycoon who insulted women, minorities and Muslims during the campaign -- defeated Hillary Clinton during the November 8 race for the White House.

"When we don't believe or don't want to believe what is real, we need a word for what seems 'above' or 'beyond' reality. Surreal is such a word," the dictionary company said in a statement.

It said another word looked up big-time in 2016 was 'bigly.'

"Donald Trump used the term 'big league' in an unusual way, as an adverb during a debate, and many people thought he said 'bigly'," said Merriam-Webster editor-at-large Peter Sokolowski.

Bigly actually is in the dictionary, and means in great scope, or with a blustering manner.

Clinton's use of "deplorable" as a plural noun to describe some of Trump's supporters -- "a basket of deplorables" -- was also a top trending word for 2016, Merriam-Webster said.