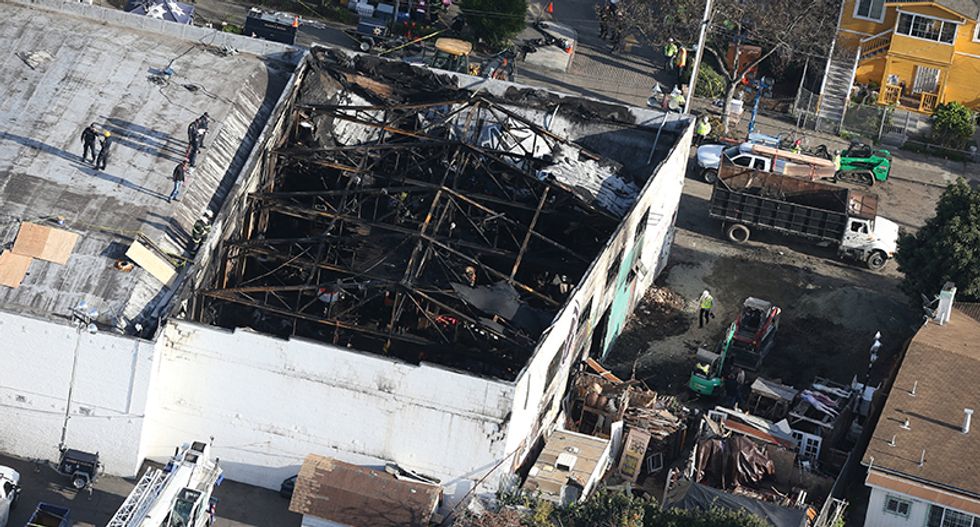 In the two years leading up to the fire at an Oakland, California warehouse that killed 36 people at a dance party late last week, city officials had entered the building on numerous occasions and had multiple opportunities to see that residents were illegally living there in hazardous conditions.

The Oakland Police Department received dozens of complaints about the warehouse, and went inside at least half a dozen times, according to police reports and accounts from former tenants and visitors.

Neighbors and former tenants also say city fire officials were in the building at least twice.

Those who spent time in the artists' cooperative known as the "Ghost Ship," say that potential code violations would have been apparent to anyone entering the building, which was not permitted for residence.

Living quarters with narrow, winding halls were built from scrap materials, including highly flammable wooden pallets. Nails were exposed, plumbing improvised and a makeshift stairway to the second floor was extremely hazardous, they say.

"If you opened the door and stepped even three feet inside it would be grossly apparent to anyone that it wasn't just being used as a warehouse or a workspace," said former Ghost Ship neighbor Ben Acevedo, 45, who estimates he made about 60 calls to police about the property over 16 months to report noise, blight and illegal occupancy.

On Wednesday, amid questions about why the city did not act to shut down the warehouse, an Oakland official said that code enforcement personnel had not entered the building in 30 years.

Oakland Mayor Libby Schaaf said she did not know the last time fire inspectors had gone inside. She did not mention police visits, but said the city would launch a new effort "to clarify the responsibility of city employees to properly report any observations of dangerous living conditions or illegal events."

LIFE IN THE GHOST SHIP

The Ghost Ship collective was founded by Derick Ion Almena, who leased the warehouse and lived in it with his wife and three children, as well as artists to whom he rented space.

Fights, raucous parties and complaints about thefts drew police to the scene numerous times during the collective's tenancy. Almena did not responded to several requests for comment.

In January 2015, officers responding to reports of a fight went inside the warehouse, attempted to locate "a stolen cellphone," and "canvassed the area and the building for the suspect," according to a police report. Court records show that two children were present.

A person who was there at the time, but declined to be named for fear of retribution, said the officers' search took them into parts of the building where people were clearly residing, including the bathroom and shower area as well as the kitchen, which was full of food and dishes.

The previous year, tenants Adriana Sparkuhl and her boyfriend reported a robbery at the warehouse to police, records show. Sparkuhl, now 31, says the report stemmed from a dispute with Almena when she and her boyfriend moved out.

Sparkuhl said she also told the officers that people, including Almena's three children, were living in the warehouse illegally and that the police said they would pay the Ghost Ship a visit. She does not know whether they did.

In July 2014, about a month after Sparkuhl filed her report, police entered the foyer of the warehouse while investigating a homicide at a Wendy's fast-food restaurant across the street, according to a resident at the time.

From where they stood, the officers would have seen the kitchen area and at least one RV, said then-resident Brad Evans, 21. Police asked Almena's three children whether they lived there, Evans recalled, and the children responded that they did.

Former resident Shelley Mack, 58, said she called police to escort her from the building when she moved out in February 2015.

"They saw everything," Mack said, adding that she told them about the illegal residents. "I told them everything they needed to know. They didn't have to guess."

Oakland police have not responded to Reuters' request for the call log of service requests to the Ghost Ship. City officials have not yet released fire inspection reports also requested by Reuters, citing a delay due to a criminal investigation of the fire by the district attorney's office.

"Are you familiar with the crime in Oakland? These guys are going from call to call and now we are responsible for code enforcement too?" he asked.

NBC Bay Area reported citing sources that there was no record of a fire inspection at the Ghost Ship over the last decade.

At least one resident and also a neighbor, however, recalled visits by fire officials to the warehouse.

Ghost Ship resident Libby Physh said a fire official visited the building twice when she lived there during the summer and fall of 2014. She said the fire official saw "how much building was going on" inside the warehouse and wanted to ensure there were clearly marked exits. Otherwise, Physh said, he "did not say anything negative" about the space.

Danielle Boudreaux, a neighbor and one-time friend of Almena and his wife, said that Almena told her around January 2015 that a fire official had recently visited the warehouse and "was breathing down" his neck.

"If you get all these complaints for the same address you'd think they'd take it more seriously, would make it a priority," said Acevedo, the former neighbor.