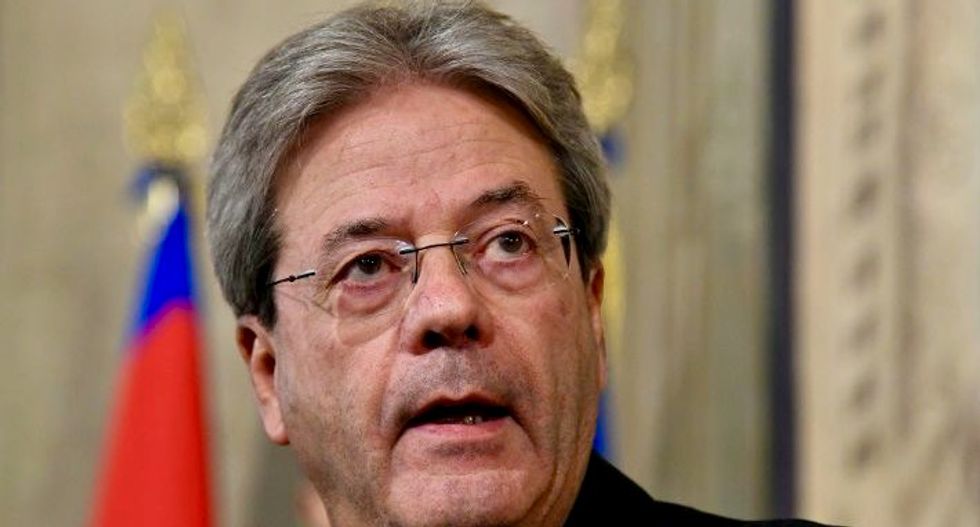 Gentiloni, who served as foreign minister under Renzi, was asked by President Sergio Mattarella to form a new centre-left government that will guide Italy to elections due by February 2018.

A close ally of the outgoing premier, Gentiloni now has to put together his own government team ahead of a parliamentary approval vote expected on Wednesday.

In a brief statement, Gentiloni said there was an "urgent need for a fully functioning government" to address a series of pressing international, economic and social issues.

Chief among those is a looming crisis in the troubled banking sector and ongoing relief efforts after a series of deadly earthquakes between August and October.

"Not by choice but out of a sense of responsibility I will be forming a government based on the outgoing majority," Gentiloni said.

Renzi, who had been in power for two years and 10 months, resigned last week after voters overwhelmingly rejected a package of constitutional reforms on which he had staked his future.

The populist Five Star Movement, which has led calls for immediate elections, said it would boycott Wednesday's vote because the new government would have no legitimacy.

"This government is not even worthy of a vote against it," said Giulia Grillo, head of the Five Star group in the Senate.

Gentiloni, 62, is very close to Renzi and will be seen by the opposition as a puppet premier keeping the seat warm for former boss, who is planning a comeback at the next elections, whenever they are.

In a statement on his Facebook page, Renzi, 41, admitted it had been a wrench to leave office and vowed to pursue his reform agenda.

"It was painful to pack the cartons yesterday evening, I'm not ashamed to say: I'm not a robot," he wrote.

"Only those who try to change things can help a country as beautiful and difficult as Italy."

Five Star, Italy's biggest opposition party, and the far-right Northern League are demanding a vote as early as possible.

But Mattarella, who enjoys extensive executive powers during government crises, has ruled that the current electoral laws must be revised first.

Theoretically that could happen quickly but the process of harmonising the rules governing elections to the two houses of parliament, the Chamber of Deputies and the Senate, could also drag on for months.

As things stand, the lower house would be elected by a system under which the largest party is guaranteed a majority of seats while the Senate would be voted in under a proportional representation system.

Most observers agree that this is a recipe for chaos.

The situation could be simplified at the end of January, when the constitutional court is due to rule on the legitimacy of the new winner-take-all system for the Chamber of Deputies.

Gentiloni had taken over as foreign minister in October 2014, replacing Federica Mogherini who is currently serving as EU foreign policy chief.

He is a longstanding friend and soulmate of Renzi's and cynics will say that the silver-haired, grey-suited politican's primary qualification for the job is that he poses no threat to the former premier's comeback plans.

A state-funded salvage operation is seen as inevitable following the European Central Bank's refusal on Friday to allow more time for a private bailout.

Under EU rules, state funds can be injected into troubled banks only if private creditors accept losses. In the case of BMPS, this could hit many small investors who hold the bank's junior bonds.