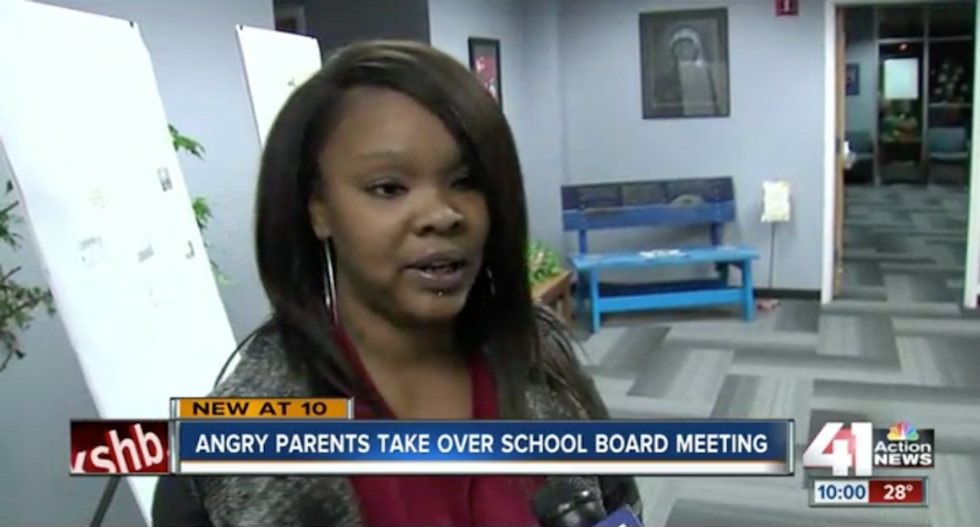 Parents of South Middle School students in Lawrence, Kansas held a sit-in on a school board meeting Monday night after learning that the Board of Education reached a settlement with a teacher accused of racism, 41 Action News reports.

In mid-October, the school placed sixth grade social studies teacher Chris Cobb on paid administrative leave over allegations that Cobb had made racist comments about black students in the classroom.

Cobb resigned in November, however documents obtained by 41 Action News show that he was set up to continue receiving payments and benefits until the end of the current school year.

"Y'all stayed here and protected Mr. Cobb!" a parent yelled during Monday's board meeting. Another shouted, "He gets to go around and tell our black children that 50 years ago, they weren't considered human?"

Monique Richardson, whose son was in Cobb's social studies class, helped organize Monday's protest. Richardson and a group of other parents complained to the school in October about Cobb's remarks.

At the time, she said, "We jumped straight into action." She explained how Cobb had made comments "that whites are more superior than blacks and that because of the color of our skin, we'll never make the amount of money that other races make."

Chitama Chitama, another parent who immigrated to the U.S. from Tanzania, said both of his sons took Cobb's social studies class. "Most of the time, they were complaining about how he does not like black folks," Chitama said.

Monday's sit-in went on for hours. Board member Marcel Harmon addressed parents, saying, "Obviously, we have some pretty upset individuals. As board members, we're going to try and listen and move forward."

Cobb released a statement on Dec. 8 in which he claimed the allegations were false. He wrote that he was "unjustly accused of making racially insensitive remarks in the classroom," and pointed to his time serving for the Peace Corps in Africa to perhaps prove that point.

Cobb added that the sources of the accusations have "a well documented history of falsehoods."

You can see clips of the action below.

"Outrage" is the biggest way to describe the feeling at tonight's @lawrenceks Board of Education meeting pic.twitter.com/w4r5qLdiew