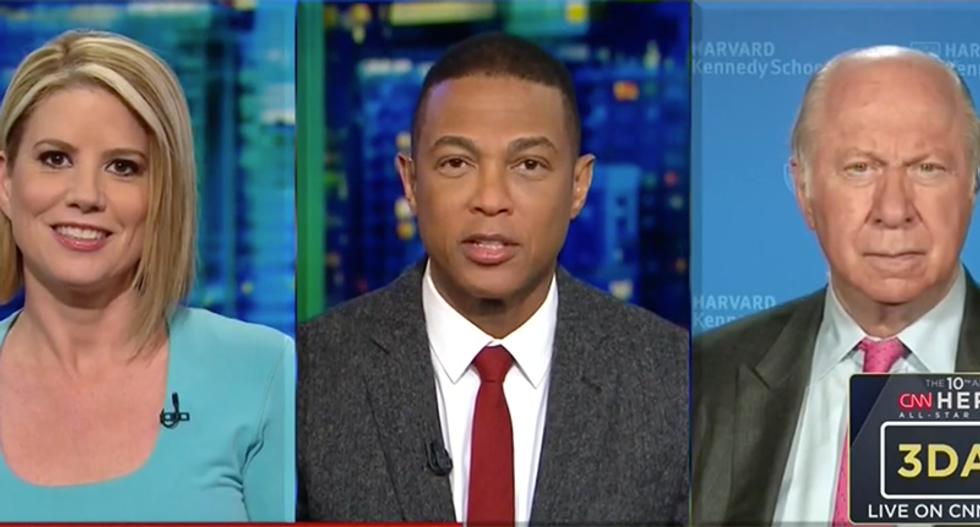 Republican political commentator David Gergen is concerned about the conflicts of interest that are presenting themselves as President-Elect Donald Trump makes his transition to the White House.

In a Thursday-night panel on CNN, the former White House staffer explained that there is already a problem as foreign diplomats schedule events in the Trump Hotel on Pennsylvania Avenue.

"They are under pressure," Gergen explained. "They feel under pressure that when visiting heads of state or government come in here to Washington, they shouldn't stay at Blair House, they should stay at his hotel. And his people are going to be out looking for hotel opportunities in other countries."

Gergen cited the recent revelation that Trump's companies were planning resorts in Taiwan. "That is pay to-to-play," he said outright. "'You pay your dues, put something into my kitty and then by the way I'll have an audience with you and consider something.' That's what happened in centuries gone by. I think it's fundamental and I think there will be Constitutional questions."

CNN political analyst Kirsten Powers argued that it isn't enough for Trump to turn his company over to his sons.

"Imagine if Chelsea Clinton was running the Clinton Foundation and was working on the transition team, which is essentially what's happening right now with his children and then Hillary was like, 'Oh, and I'm just going to hand it off as president to Chelsea and she's going to run this with Bill Clinton.' People would be hysterical!" Powers exclaimed. "Their heads would be exploding. This was what Donald Trump criticized her on when she was Secretary of State."

(READ MORE: Why President-elect Trump doesn’t think he has a conflict of interest problem)

“He was hired to do one job and that’s the president of the United States,” Powers continued.

Gergen also noted that Trump doesn't seem to understand the safety angle of his attacks of businesses on Twitter.

"I do think he wants to draw blood," Gergen said. "And when he goes after Boeing, the Air Force One costs, he's scoring points with people who want to cut government costs but mostly he's trying to bully Boeing and they are apparently talking to him now. But the bigger issue is how he goes after these individual companies, saying, 'If you now leave, I'm going to deregulate and the rest. If you leave anyway, I'm going to slap a 35 percent tariff on you. You're not going to be able to sell your cars because the prices will go up 35 percent.' That's a pretty big threat."

In the end, Gergen doesn't want to "prejudge it totally," but he seems to hope that the president-elect will do the right thing.

Check out the full conversation below: