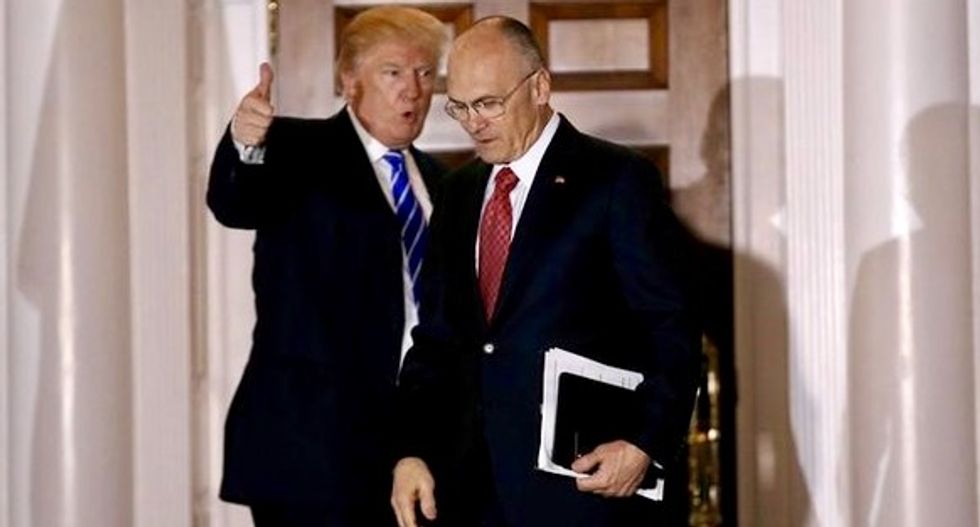 Fast food executive Andy Puzder, President-elect Donald Trump's choice to head the Labor Department, could be in a position to undermine the agency's new rule on retirement advice which has long been opposed by the financial industry.

Puzder has not publicly commented on the fiduciary rule, which is due to go into effect in April, but a glimpse into the 401(k) plans he offers his own employees at CKE Restaurants may provide a few clues about his philosophy.

The plan is less generous than some of its fast food competitors, according to data and analysis from Brightscope Inc, a research company that rates 401k plans.

In 2015, CKE opted not to match the retirement contributions of the plan's participants, according to Labor Department data.

The plan also carries high-fee investments, has low participation and generally scores worse than many of its rivals even in the notoriously high-turnover, low-benefit fast-food industry, according to Brightscope.

The CKE plan suggests that Puzder will bring "more of an industry-friendly perspective to the office," said Mike Alfred, managing director at Brightscope, which ranks it below those at Jack in the Box, McDonalds and Yum! Brands Inc.

A spokeswoman for CKE, a privately held company that owns and operates fast food chains including Carl's Jr. and Hardee's, referred all questions to a member of Trump's transition team.

A spokeswoman for the transition team did not have an immediate comment.

The plan could be a sign that CKE chief executive officer Puzder will seek to delay - or even potentially support reversing the fiduciary rule if he is confirmed in his new position by the Senate.

The rule requires retirement advisers to put their clients' interests ahead of their own by eliminating conflicts of interest that can lead some brokers to recommend investments that will get them a higher commission or fee.

It applies to 401(k) type plans as well as privately-held Individual Retirement Accounts.

The financial sector has opposed the rule, saying it may drive up the cost of getting good retirement advice and leave consumers with access to fewer products.

But companies have already put money into getting ready for it, with some changing their broker compensation plans. With so much money already invested, financial firms may not wish to see it reversed now, said Barbara Roper, director of investor protection for the Consumer Federation of America.

"It's not just a slam dunk to reverse course," she said.

Should Puzder want to take action against the rule, his quickest move could be to delay its implementation while the Labor Department and the Securities and Exchange Commission, which has considered a comparable rule for all investment advisers, take another look. One way to delay it could entail declining to enforce the rule.

The rule likely will get delayed, Cowen and Company research analyst Jaret Seiberg wrote in a note to clients on Thursday. Puzder "does not sound like the type of individual who would be supportive of a fiduciary duty regime."

The rule is already in jeopardy. Several financial trade groups, including the Chamber of Commerce, have filed lawsuits to kill it.

Republican members of Congress are gunning to have it repealed and may be able to muster enough votes without the fear of a veto after Trump becomes president.

Missouri Republican Rep. Ann Wagner, a chief architect of a bill that would largely derail the fiduciary rule, on Friday praised Trump's plan to nominate Puzder.

"I look forward to working with Andy next year to repeal the fiduciary rule," she said in a statement.

Progressive groups who support the rule are vowing to fight for its survival and plan to try and highlight its populist appeal for everyday Americans.

"The thing that we will try to do... is make incredibly clear that anyone who votes on the wrong side of this is putting themselves with corporate America up against the American public," said Lisa Gilbert, a director of Public Citizen's Congress Watch division who closely follows the issue.