Robert Durst of 'The Jinx' to appear in L.A. court on murder charge 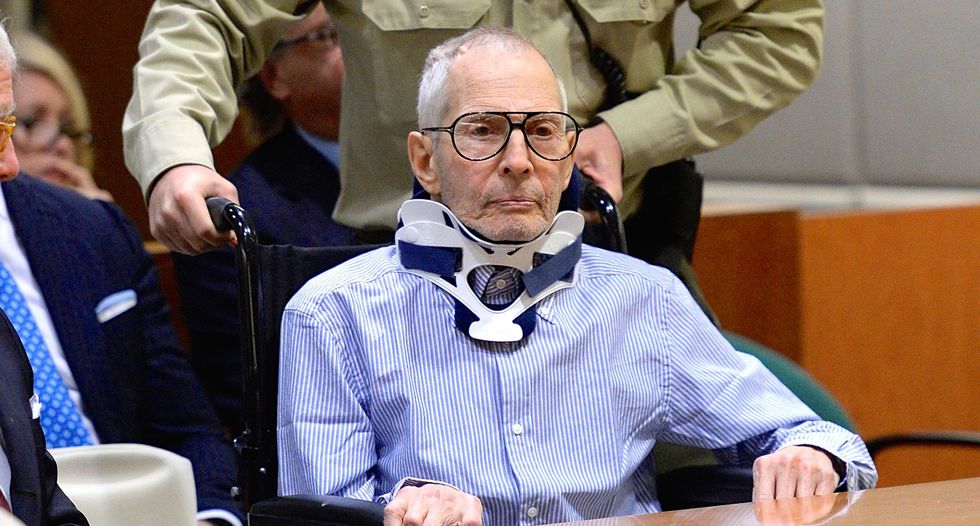 Robert Durst in a wheelchair arrives for his arraignment on capital murder charges in the death of Susan Berman, with his lawyer Dick DeGuerin (L) looking on, in Los Angeles, California, U.S. November 7, 2016. REUTERS/Kevork Djansezian

Wealthy real estate scion Robert Durst, whose ties to several slayings were chronicled in HBO's documentary "The Jinx," was due back in court on Wednesday for a hearing on documents seized in the investigation of a murder case pending against him in Los Angeles.

Durst, 73, is charged with fatally shooting writer and longtime confidante Susan Berman in December 2000, a murder prosecutors say he committed because of what she knew about the unsolved demise of his wife in New York two decades earlier.

He pleaded not guilty last month to first-degree murder in the Berman case.

Prosecutors have asked a judge to appoint an independent expert, or "special master," to examine crates of Durst-related documents confiscated by investigators and determine which papers should be excluded as material protected under attorney-client privilege.

One of the main points of contention is likely to be the admissibility of a collection of legal files and other papers seized from a friend of the defendant. Prosecutors say Durst waived his attorney-client privilege over those documents when he allowed "The Jinx" producers to comb through them.

The rest of the material was taken from Durst's Houston apartment and from the New Orleans hotel where he was arrested in March 2015.

Defense attorney Dick DeGuerin said in a telephone interview he supports appointing a special master. But he also plans to address prosecutors' public release of a jailhouse statement Durst made in 2015, a disclosure he said could prejudice potential jurors.

Berman, 55, was found shot dead in her Los Angeles home, reportedly execution style, not long after police in New York reopened their investigation into the 1982 disappearance and presumed killing of his wife, Kathleen.

Durst was questioned but never charged in that probe.

The Berman case is likely to revive discussions not only about the investigation of his wife's disappearance but also his 2003 acquittal by a jury in the killing and dismemberment of a Texas neighbor two years before.

Durst was formally charged with the Berman murder a day after HBO aired the final episode of "The Jinx," in which Durst was recorded muttering to himself off-camera: "What the hell did I do? Killed them all, of course."

Durst told authorities after his arrest that he smoked marijuana daily and was high on methamphetamine during his appearance on "The Jinx," according to court records.