Russia analyst: I was just in Moscow and people are laughing as Putin plays 'that fool' Donald Trump 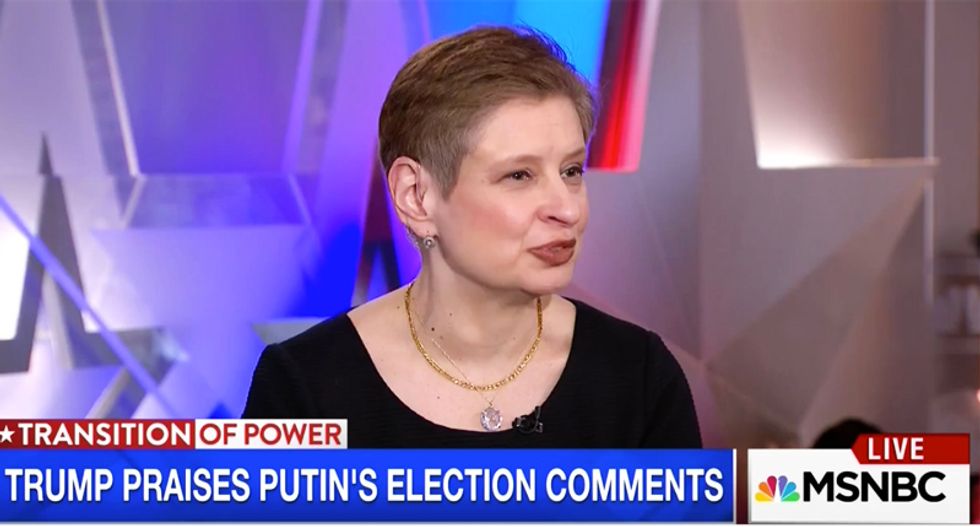 Discussing a recent flattering letter sent by Russian President Vladimir Putin to Donald Trump, an entire MSNBC panel agreed that the Russians are laughing at the U.S. because they can see Putin treating the president-elect like "a fool."

"I was just in Moscow and the Russians are saying 'Look at those fools, look at their their democracy.' Absolutely," she said. "'How could America lecture us on any development, institutions, human rights, democracy, rhetoric when they just elected Donald Trump. He's such a fool. He's such a bully. That's what America deserves and we're going to take advantage of it.' And that's how Russians feel about it, and now it's taking shape with letters from Vladimir Putin to Donald Trump with their exchange on potential nuclear armament and whatnot."

Asked to chime in on whether Putin's relationship with Trump will hinder an investigation into Russian hacking of the the election, intelligence analyst Malcolm Nance said of course it would and laughed at how easily Trump can be manipulated.

"I don't think there will be any accountability with the regards of the Russian hacking against the DNC or even violating the entirety of the U.S. electoral process. He has benefited from that," Nance explaiend. "He's going to shut down any investigation if it implicates him or his campaign."

"However, Nina is right," he continued. "We are being played as fools by a spymaster-in-chief, a former KGB officer, Director of Russian Intelligence. He's laughing at us in his letters which stroke Donald Trump. 'His excellency!' We haven't had a letter like that in the United States since King George III. As long as Trump is manipulated, Russia and China will take our market share from the international markets out there, and the United States will be relegated to a third class country."