Search completed at Oakland warehouse in fire that killed 36 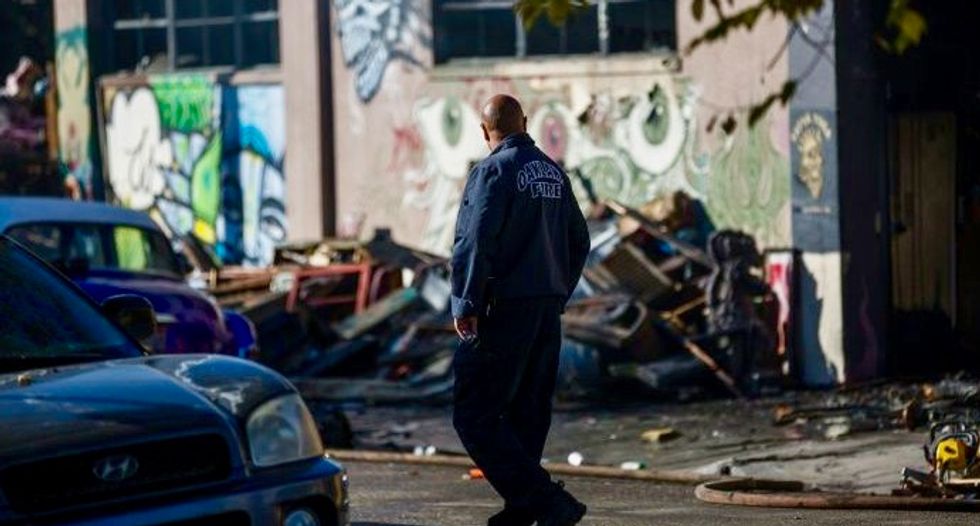 A fireman walks before a warehouse after it was destroyed by a fire, December 3, 2016 in Oakland, California

Authorities concluded their search on Wednesday of an Oakland warehouse gutted by a fast-moving fire that killed 36 people during a dance party, a police official said.

The blaze erupted Friday in a sprawling two-story building known as the Ghost Ship that was leased to an artists' collective.

It was the deadliest blaze in the United States since 100 people perished in a 2003 nightclub fire in Rhode Island.

Oakland police spokeswoman Johnna Watson told local television station KRON at a news conference that investigators are moving debris away from the charred remains of the warehouse to piece through the material.

"Officially the search for any additional victims has concluded and unfortunately the toll is 36," Watson told KRON.

Officials have proclaimed a local state of emergency, potentially allowing for state and federal funds to help cover the costs of the response to the inferno, Oakland Fire Chief Teresa Deloach Reed said on Tuesday. The declaration must be ratified by the City Council this week to become official.

The cause of the blaze has yet to be determined, but investigators are focusing on a particular appliance at the building.

"(A) refrigerator is something that they're looking at as a potential source of ignition," U.S. Bureau of Alcohol, Tobacco, Firearms and Explosives Special Agent Jill Snyder told reporters.

The coroner's office has concluded autopsies on most of the victims, and the cause of death in all those cases was determined to be smoke inhalation, Alameda County Sheriff's Office spokesman J.D. Nelson said in a phone interview. That is typical on a major fire, he said.

Officials have said arson was not immediately suspected. However, charges ranging from involuntary manslaughter to murder could be brought, Alameda County District Attorney Nancy O'Malley told reporters on Monday.

The dance party was held on the second floor, which partially collapsed. The 10,000-square-foot (900-square-metre) building lacked sprinklers and smoke detectors, and wooden pallets partially formed a makeshift stairway between its first and second floors, officials have said. It had just two exterior doors.