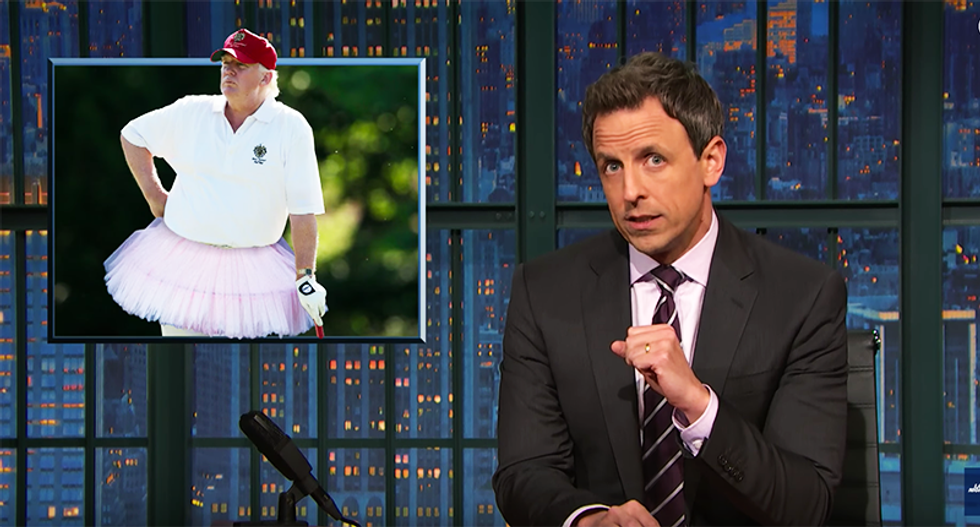 Donald Trump is nothing more than an entitled teenager whose parents defend his ridiculous statements according to Seth Meyers. The "Late Night" host noted Monday night that Trump lacks the "sober, analytical thinking and firm grasp on reality" necessary to handle the world. All the while, his campaign aides are enabling him like a troubled child.

One would assume that Trump would have stopped tweeting out the fake news or making up conspiracy theories, but no. He tweeted this weekend that he would have "won the popular vote if millions of people who voted illegally." The problem is that millions of people did not vote illegally and Trump didn't provide any evidence.

Then, of course, once the press began asking questions about proof for Trump's claim, the president-elect went on a Twitter tirade. He ultimately started retweeting attacks on a CNN reporter that was fact-checking him. One of those tweets came from a 16-year-old boy from California.

"And it makes sense that Trump would identify with a 16-year-old boy, as he's surrounded himself with aides and spokespeople who defend his actions the way entitled parents would defend the sh*t their kid did at high school," Meyers said.

He played a recent appearance of Mike Pence on "This Week with George Stephanopoulos," where the VP-elect said that Trump is entitled "to express his opinion as president-elect." Stephanopoulos pressed Pence, wondering why it's "refreshing" to make stuff up.

"My boy Donnie is entitled to his opinion!" Meyers exclaimed, pretending to be a Trump parent. "Also, if you didn't want him to pull the fire alarm, maybe you shouldn't put it in the middle of the hallway! You know he likes to grab stuff!"

Even incoming Chief of Staff Reince Preibus enabled Trump's invented facts in an interview on "Face the Nation." They've even gone so far as to have former Sen. Scott Brown (R-MA) tweet out that people were driving up from Massachusettes to New Hampshire to cast ballots. That's absolutely a false claim, unless it was Brown.

The problem is that people actually believe Trump. One CNN anchor asked Trump supporters in a focus group about the so-called "voter fraud" and found that one believed millions of undocumented immigrants voted in California. She ultimately resorted to a giant "face palm" moment.

"I'm beginning to think the hand on the forehead is how we're going to do the Pledge of Allegiance during the Trump years," Meyers joked.

He explained that at the heart of Trump's conspiracy theory "is the cynical notion that truth doesn't matter at all. That people can choose to believe whatever reality they want to believe." Even Trump supporter Scottie Nell Hughes got caught up in it, claiming on CNN that there are no such things as facts.

But facts do matter, and Trump's way of handling foreign policy like he handles conspiracy theories is already causing problems — such as his recent Taiwan flub.

"Any action that China might see as provocative should be done only after a long period of careful study and consideration," Meyers dreamed. "Or, if you're Trump, you could just say, 'Screw it! Let's piss them off right away and see what happens!'"

"If any of this makes it seem like Trump is in over his head, that might be because he is," Meyers concluded. "Trump supporter Newt Gingrich told USA Today last week that he met with Trump recently and Trump told him, 'This is really a bigger job than I thought.'"

Meyers then put his hand over his head and began saying the Pledge of Allegiance again.